Slovenia and the Creepiest Castle

We arrived in Ljubljana, Slovenia’s capital, three hours after departing Zagreb, the capital of Croatia. The train was a lovely design with six seats to a cabin with a sliding glass door. We had an extremely friendly Croatian lady in our cabin who was visiting Ljubljana to lay flowers at her family grave plot. The train ride went quickly and the customs officials were extremely efficient and friendly, and we arrived without incident.

Once in Ljubljana, however, things took a nasty turn. The information center at the train station gave us a map and a “good luck!” wave as we walked out the door. It felt a bit odd at the moment but we set off with our bags in the direction indicated on the map towards our hostel. After a grueling walk (our bags now way around 50lbs each) we arrived in the embassy district to discover the map was wrong, and we were now in the outskirts of town without local currency to take a cab or bus, and with no idea where to go. I sat on the ground and took off my bag. A cat jumped out of the bushes next to me and sat on my lap, cheering me up, while Mike consulted the map from the info center and compared it with the already miniscule and incomplete map in the Lonely Planet book. There was nothing to do but attempt to follow main roads until we found signs for old town, and then ask around from there.

The walk was made more humorous by the sheer ridiculousness of it. Mike had his large backpack on his back, which has a red shell on it for waterproofing. On his front he had a smaller backpack that also had a plastic red shell, he looked like a man smashed between two giant ladybugs. I had my pack, and my camera bag and our books in my arms, so that between the two of us we had not one free hand. Perhaps because of our pathetic appearance, we were approached by two travelers who suggested we go to their hostel. Seeing as we had no other option whatsoever, we followed their apt directions and arrived in time to grab two bunk-beds in the 6 man dorm. The dorm had a kitchenette, so we dropped our stuff and went across the river to the shop to grab some fresh veggies to cook with our seemingly endless supply of ramen. Other tenants came and went as we ate, warmed up, and enjoyed the hostel’s atmosphere. 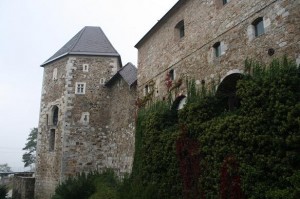 The next morning we walked around Ljubljana in the rain. For us it is hard to imagine any country in Eastern Europe without rain now. We walked up the hill overlooking the city to the Ljubljana Castle, parts of which date from the 15th century. We expected an ancient, Dracula-like castle shrouded in mist and mystery, but were shocked to find a very modern structure that has obviously been erected over the older buildings. In one of the towers there was a modern art exhibit, which was so confusing it left us a bit rattled. There was a chair in the corner which you could sit on while a screen before you showed a spiraling hole, as if you were always falling but never reaching the bottom. Across the tower was a TV showing a play of an old man positioning models to paint them, but never quite getting it right. In the center of the tower was a chandelier which had been lowered all the way to the floor so you were looking down on it. We didn’t stay long in the tower, obviously, but once we mounted the steps in the adjacent building we found another art exhibit full of neon nude women petting various animals. We followed signs to a National Geographic exhibit to find a basement room filled with pictures of animals in yellow frames, rounding the corner we found a circular room filled with lights shaped like worms that glowed just brightly enough to make it extremely creepy. We left the castle after that.

We saw several of the city’s highlight sites, including the dragon bridge and the Franciscan Church, all of which were enjoyable. Our train left at 3:20am. We would arrive in Venice, Italy, at 7am. No matter how we try to resist night transportation, the logic of it always outweighs the discomfort it comes with and we jump right aboard!