Stalingrad – Not One Step Back 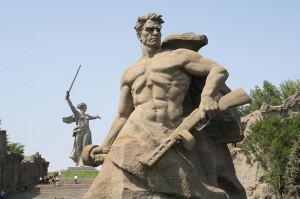 Seemingly small from a distance, the Battle of Stalingrad monument is absolutely massive.  It takes a few minutes to realize the tiny dots walking around the base are people.  The long stretch of stairs heading towards the statue are surrounded by battle scene frescoes, memorial plaques, and even sounds and music.  Each step up, sets the mood and almost brings you back to to the battle.  By the time we reached the eternal flame, we were all covered in sweat as it was mid-July.  Everyone was complaining and walking through the sprinklers that happened to be running at noon. 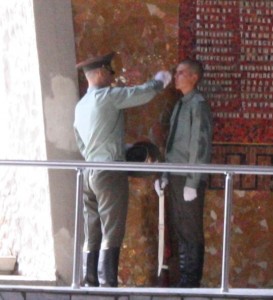 Once we reached the flame room however, everyone’s face straightened in awe at the size of the room.  There were two guards standing in front of the flame – a fist wrapped around a torch.  As you spiral around the room counter-clockwise, the walls next to you are covered with the names of all the officers who died in the Battle for Stalingrad. By the time we reached the top of the stairs, no one was complaining about the heat anymore as there were two more guards standing at the exit, unmoving, as a blanket of sunlight enveloped them.  Beads of sweat were rolling down the guard’s face as he stood silently in his Class As.  The lead guard made his rounds and upon seeing his fellow comrade sweating profusely, we walked over to him, removed his cap, and slowly wiped the sweat from his brow.  I managed to snap a few photos of this as it happened, but we also got a lot of video – which we haven’t converted electronically yet.

The next section of the monument was covered with gardens and more officer monuments as we approached ‘The Lady of Stalingrad.’  From the top of the hill, the lady looks down at the Volga River where the Germans and Russians clashed and dug in for nearly seven months as the battle raged.  Stalingrad was vital to both sides, not only because it was a main transport hub on the Volga River for coal and oil to fuel Stalin’s Armies, but it would also be an ideological victory for the Germans to take a city with the Soviet leader’s name and provided access to the Caucuses via the Caspian Sea. 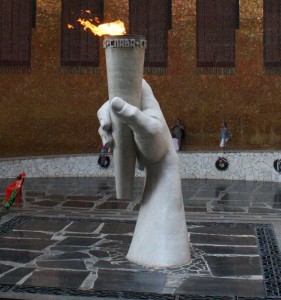 The Stalingrad War Memorial in Volgograd was one of the best Communist War memorials I have seen.  I am glad we took a 500 KM detour, along with several other ralliers, to make the trip to see it as I can’t imagine to many more opportunities in my life to be that close to the city.  After the memorial, we quickly headed out of town to drive to Kazakhstan.  Our convoy would be ending soon as we turned South for Uzbekistan and the rest went due East across the whole of Kazakhstan.