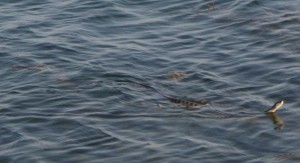 After the very long drive from Nohur to the Turkmenbasy on the Caspian Sea, and searching for a place to stay, we all ended up at the reasonably priced Turkmenbasy Hotel.  For about $60 a night, we got a suit with a view of the Caspian Sea from the balcony.  Initially, we drove all the way out to a peninsula to get a room at one of the new “Dubai of Turkmenistan” resort hotels.  Niyazov’s dream was to make Turkmenbasy a resort town comparible to Dubai.  Let’s just say they have a very long way to go.  All of the rooms available at the partially constructed “resort” hotels were priced at over 300 – 400 USD.  So we found a nice room at the Turkembasy like I said before.

After the hot drive through the desert, we were all ready for a beer and a swim.  We grabbed a quick drink on our way out of the ground floor and walked slowly through the scorching heat down to the Sea.  Directly out in front of the hotel was shoreline however, there were only people near or in the water farther down the coast – which seemed to be the same as what was in front of us.  I walked down and started wadding around in the water.  Immediately I noticed a thick bed of weeds about 8 feet from the shore.  “That must be why all the locals are farther down the beach,” I thought.  So we walked down.  We hadn’t gotten about 5 steps when Lauren yells, “WHAT THE HECK IS THAT!”  She was referring to a 4 foot long snake that was poking its head and neck about 1.5 feet out of the water.  A longer coil was visible below the surface and was now resting on top of the weed bed.  Then we started noticing several snakes poking their heads out of the water for air.

As went continued down the beach we found a clearing and started to get in the water, believing it to be snake free.  We soon found out that this weed free area between the two weed beds was The Great Caspian Sea Snake Highway – serving as transport between feeding grounds.  After kicking the sand around on the beach for a while and contemplating swimming, we really had our hearts set on swimming in the Caspian, it was now or never.  Our friend and I stared at each other, picked up some small stones and plastered the area in front of us with a barrage of pebbles, and then dove into snake heaven face first.  That was the first time I have ever swum out of fear as I, like my childhood hero, share a fear of snakes – Ophidiophobia.  We quickly kicked out past the weed bed and tread water out in the Caspian.  Then, we realized that we had to go back.  Not wanting to prolong the inevitable, we turned back and made it through without a bite.  I highly doubt that they would attack humans, but it was still slightly terrifying.  I got out of the Sea, turned to Lauren and said, “Conquered it,” and we all went out for dinner.

One thought on “Swimming with Snakes”