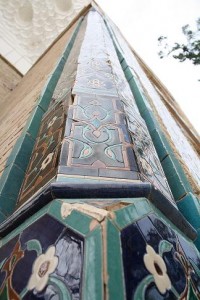 The Tomb of Timur

Down the street past the Registan, near a huge monument of Tamerlane, sits the Guri Amir Mausoleum. The mausoleum was a huge complex with a domed roof. As we approached, the entry arch of the mausoleum was under “restoration.” This consisted of locals hammering away at the mosaic and tiled facades of the archway with chisels. Pieces of fired and kilned tile were falling thirty feet to the ground and shattering. I am not sure when the last restoration occurred, possibly after the great earthquake in the early 20th century, or perhaps they were very old. With history much longer than Americans can sympathize with, it is difficult to choose what is better for these sites: allow them to decay, but maintain their antiquity, or keep them restored in a state of what they were once believed to look like.

Either way, Tamerlane is the heroic icon of Central Asia, but a villain throughout most of the Arab world and parts of India. Creating a huge empire that stretched from near Kashgar (in Western China) to Turkey, the Caucasus, Iraq and Pakistan, Tamerlane was feared throughout the region. Using vicious propaganda campaigns and disseminating information in target cities to bring down moral before his arrival, Tamerlane was a great planner. He organized his campaigns years in advance – enough so that he planted barley for his horses 2 years before the campaign all along the routes to victory. In an unusual winter campaign, Tamerlane died of fever and plague in the farthest reaches of the Syr-Daria in 1404. He was campaigning to attach the Chinese Ming Dynasty and many historians argue that East Asia may have been a very different place (Muslim) had Tamerlane not died in this winter campaign. 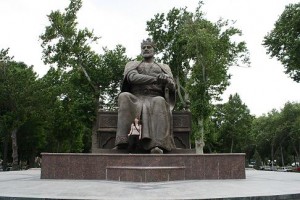 Although remembered in Iraq for erecting pyramids of 40,000 and 70,000 human skulls, Tamerlane rests a hero in the Guri Amir Mausoleum. Buried with several of his sons and grandsons, as well as his teacher (another descendent of the Prophet Mohammed), beautiful marble tomb markers fill the domed room of the mausoleum. Timur’s (Tamerlane) sarcophagus was once split in half by a Persian king who invaded several centuries after his death. The king’s son fell deathly ill and religious interpreters and sorcerers advised that the king return Timur to his rightful resting place. Soon after, the kings son healed, but the casket was in two pieces after being damaged enroot. A Soviet anthropologist, Mikhail Gerasimov exhumed the body of Tamerlane in 1941 and confirmed that Tamerlane may have been a decedent of Ghengis Khan because of several of his Mongol features. Tamerlane was 5’8’’ (tall for his time) and suffered a lame hip so he more than likely walked with a limp. After opening the tomb Gerasimov discovered an inscription on the tomb, “Whomsoever opens my tomb shall unleash an invader more terrible than I.” Only a few hours later, the Nazi Army launched its invasion of the Soviet Union.