Tbilisi and the Republic of Georgia

Our introduction to Georgia was astonishing. While the country itself is beautiful but developing, the people could not be any finer. When we arrived in Tbilisi on the night train from Baku, it was 10:00am and people were bustling about outside the train station selling socks, ping pong paddles and other strange items. We quickly converted some USD to lari, and headed off in the direction of a hostel recommended in a guide book.We arrived at said hostel, which was supposed to be a home-stay of sorts, to be met with a friendly but incredibly drunk woman in her 60s who was scantily clad and perhaps raving mad. We went down the street and found another hostel called the Green Stairs. While the rooms were shabby at best (it could reach a staggering 130 degrees at midday due to the greenhouse-like roof) the owner was so friendly that we ended up staying in Tbilisi longer than planned just to be around him.

Tbilisi itself is an incredible city, but one in disarray. Every beautiful building has seen better days, and cracked paint and splitting wood is the norm. The back alleys are safe, and we gave ourselves a tour of the city while searching for a café with wi-fi (such is the life of a modern traveler). 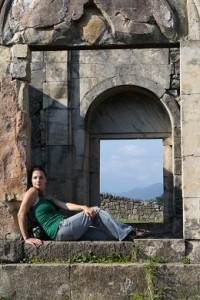 Having found an area with wi-fi we discovered we were in the tourist hub of the city, with fanny-packs and tinted visors galore. We toured around from church to church, admiring the craftsmanship and the devout followers. The interior of each is unique but similar, with pictures of decapitated saints and skull and bones under the cross (none of which made sense to us). We sat around the city like two people who had just run a marathon, and lazed about for several days in Tbilisi, taking it all in. We planned out route through the Republic of Georgia, and generally moved at a pace not unlike a snails.

3 thoughts on “Tbilisi and the Republic of Georgia”