From Banpo to the warriors we decided to grab a cab. It was nearly 90 degrees outside and our bags were becoming a burden. Meanwhile, we were finding it a bit hard to locate food near the tourist attractions that was not encased in plastic wrap, and we wanted a solid Xi’an meal. We finally flagged a cab and scooted into the back seat. We could almost see the money symbols click into his eyes like a cartoon when he saw our foreign faces and heavy bags. We were going to be taken for a pointless and expensive ride.

The driver ignored Mike’s Chinese and took us into the desert. We were surrounded by sand, heat and the occasional pile of discarded appliances and trash. Finally we saw buildings in the distance, a miserable, Russian-looking oasis. The driver promised to take us straight to the warriors after we went into the building, which was owned by a friend of his—a jade merchant. We walked inside, confused and bitter; our cab was the only means of transportation so we had to do what he wanted. We looked at the overpriced jade and walked back outside and got in the cab, having purchased nothing. The driver was talking to someone outside his window, pocketed something and turned the car around and headed back towards civilization. It took nearly an hour before we arrived. 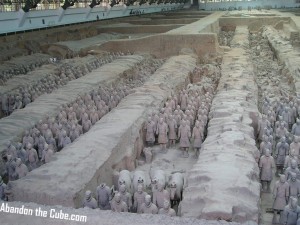 The warriors were a bit of a disappointment to me. They were amazing in that their craftsmanship was stellar, their alignment precise, and their purpose mystical. However, when we visited much of the ruins were under repair and we watched (remember, we are history majors) as young Chinese workers crawled all about the shafts, picking up pieces and moving them about. If a shard did not fit anywhere it was tossed in a bag and carried out of the pit to be assembled later, if possible. Looking down on the soldiers I wondered how much of each one was ancient, and how much was modern super glue. One additional aspect of visiting the warriors was that one was constantly approached by salesmen of various silly replica objects. In all, it was an interesting visit to an ancient site, but one covered in a shroud of modernity and disregard.

We boarded a bus to visit the tomb of Qin Shi Huang, the mighty emperor to whom the warriors were a testament and a constant vigilant guard. The bus took less than fifteen minutes, but it was an interesting ride nonetheless. A strange Canadian man with dysentery sat next to me and asked to look at my guidebook. I handed it to him, he coughed and wheezed on the cover, crackled the pages, and nearly collapsed into my lap. He had been traveling in China for six months, and looked the worse for wear. In fact, we heavily recommended a detour to the hospital, but he took out a cloth, wiped some yellow pus from his eyes, and handed back the guide book. Mike took the book and wiped it off with hand sanitizer and put it back in his bag. The Canadian got off at the tomb and sauntered into the shade and slept. He was gone when we came back.

The tomb itself is a giant mountain with steps on one side. You climb and climb, bake in the sun, refill on water, and climb some more. Finally you reach the top to discover a platform the size of a Midwestern living room, and an old man with a wicker basket filled with ice and water. I’m convinced to this day that the old man is the best businessman on the planet. He was charging a ridiculous amount for the ice water. Looking at his aged frame I was embarrassed to realize he had not only made it up the steps, but had done so carrying water and ice, and probably did so several times a day. I paid nearly ten times the amount water should cost, and was happy to do so. I bet that man lives in a mansion today, and no one deserves it more.

Halfway down the tomb we encountered a modern ode to an ancient ceremony. Men and women in bright, replica costumes and army uniforms danced around on a large stage, waving flags and chanting to the sounds of an eclectic piano over the loudspeaker system. We watched for a bit, sitting in the shade. When I turned around to make a comment to Mike I discovered I was alone.

terracotta warriors Xi'an
Previous PostExploring Xian Amidst the Dangers of Dysentery Next PostTraveling by High-Speed Train in China: Beijing to Xian