The Best Worst Luck Ever

This is the story of how a lone Aussie walking around in an un-named ger village in the middle of the Mongolian steppe managed to save our rag-tag convoy of international ralliers. For this to make sense, you may have to read the previous post, The Surprise Recovery of the ATC Saxo, which outlines how our car was nearly dead when suddenly another team’s Fiat died and was towed by the Red Cross to a small ger camp.

We arrived in the camp only to discover that the afore-promised two truck was out of commission. The camp’s only shop was charging over $4 a soda, and the food was so inflated in cost that there was little we could afford. We were all eager to get out of town as soon as was possible, and stood about negotiating with various locals to secure tow for our fallen Fiat Diablo and their Norwegian owners. Suddenly, Al the Canadian walked over with wild stories about having met an Aussie miner. Chappy, he had been called, had invited us all to dine, shower and sleep at the mining camp a short distance off. We all smiled from ear to ear but as Al was a prankster, the smiles faded as soon as the realization that he must be joking set in. He laughed and waved over a strange messiah of a character with a long flowing grey beard and the kindest blue eyes. He was wearing denim and a yellow rain jacket that would have fit in perfectly on the docks of any major port. He looked tired and yet welcoming, worn and yet incredibly alive. Chappy shook our hands and told us to follow him. Meanwhile, he had the Diablo towed to the mining camp’s garage for safe keeping. 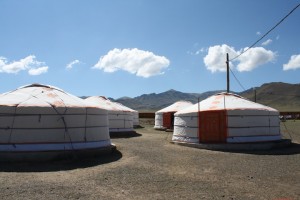 We followed Chappy around several small hills and into a ravine. I began to doubt we were going anywhere but on a wild goose chase when suddenly a small, walled-in camp emerged in the distance. A parking lot with white rock spaces rested out front with a chain-link fence surrounding about 20-25 gers. Two buildings stood at the southern end, with roughly ten shipping containers in various positions acting as different storage, living and bathing compartments. We were welcomed by Chappy and some of the other English-speaking workers at the camp. The head of safety and regulations was a Mongolian lady with perfect English who showed me, the only woman in our convoy, to the lady’s bathroom. The bathroom was a shipping container with a wooden door that led to two shower stalls and a small bathroom with a sink. She claimed there was constant hot water, a statement that nearly made me hug her. She next led me to a the wooden buildings at the southern center of the compound which revealed a game room complete with pool table, ping-pong, darts and work-out equipment and a game table for chess or cards and a small library and computer room for internet. The adjoining room was divided by shipping container walls but housed a small kitchen with state-of-the-art facilities and tables to seat over 100. Here I was introduced to a Mongolian woman who was married to an American diplomat (stationed overseas at present). She immediately took an interest in us and made sure we had everything we could ever need. She led us to an unoccupied ger where several workers were bringing in extra beds and covering them in blankets and pillows. Their kindness was overwhelming and we all melted into a sensation of comfort and glee. 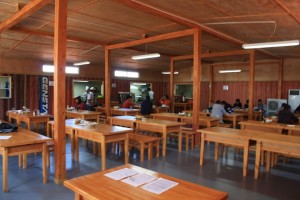 I jumped in the shower so fast I nearly left the shampoo in the ger. It was indeed hot water, and the first I had encountered since arriving in Mongolia six days prior. I was ecstatic, and stayed in the shower for twenty minutes until the water ran clear and all of the dust and soot was out of my hair. Afterwards, I met the rest of the convoy in the dining room and gorged myself on expertly cooked Mongolian cuisine and juice. The first home-cooked meal in Mongolia and the first non-packaged food in a long while. We met and chatted with several Westerners who were at the mining camp doing reporting, analysis and safety checks. They did not seem as happy about the hot showers and amazing food as we were, but everyone’s spirits in the camp rose when they saw how happy they were making us all, and how appreciative we all were. 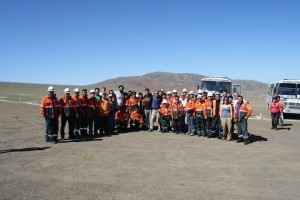 The next morning, after sleeping in a bed for the first time in a long while, we arose to a full breakfast and a day of waiting in the camp’s game room while the Norwegians tended to their car. We all believed it was dead, but by dinner time they emerged with news that an entire team of mining engineers had the day off and had decided to help rebuild engine and come up with a solution. They had, essentially, fixed the Diablo for free and used their expert advise to mend a broken fuel pump. We ate dinner with the miners and Chappy’s whole crew before setting out nearly at dusk for the next town on the road.

Chappy made us aware that not only had we taken a series of wrong turns to get where we were, but that he could get us back on track with one minor correction. We were appreciative of his advice, and the whole crew took pictures with our tiny convoy before setting out.

THANK YOU CHAPPY, and THANK YOU TO THE LEIGHTON CONTRACTORS and Mongolian support teams!

Coming next: Find out if the ATC team’s Citroen Saxo makes it to Ulaan Bataar