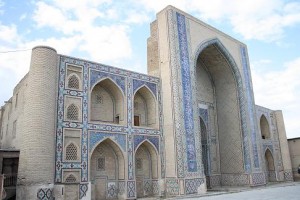 We arrived in Bukhara this afternoon and were a bit shocked by the strange reception we received. Having met the owner of a B&B on the street in Samarkand, we decided to accompany her to her place in Bukhara.  We were going to the city anyway and she was very friendly. This morning she drove past us in a cab, waved when she recognized us and then jumped out and offered to share her taxi to the station.  We were in the middle of negotiating a fare with another cabbie but decided it was wise to just go with her, as it would be quicker.  She talked with the various cabbies on the street a moment and then hurriedly got in the cab.  Once we drove off, she looked over at us and said, “that man said he would kill me.”  We asked what she was talking about and she said, “he said if I took his tourists away (meaning us) he would come to the hotel and kill me.”  It was an odd thing to hear so suddenly so we, naturally, agreed when she followed this up with, “perhaps he crazy. I don’t know. I hope he no follow us to the train station.”  And that was all it took to have me death gripping my bags and looking out the window behind us the whole way to the station.
After arriving in Bukhara safe and un-murdered, we decided to stay with her one night and explore the city. As we were leaving her yard, she ran up and gave us a series of tips that effectively scared us off walking around at night.  Essentially, she told us not to talk to any man in Bukhara because they could not be trusted. Especially a man named Niecco down at Lyabi-Hauz, who had pot marks on his face. Niecco was fond of taking tourists to his house for tea and dinner and then robbing them and beating them silly. Our hostess also explained to us that if we wanted to take a cab anywhere we should use one of her neighbors because every other cabbie was corrupt and would either fight us and steal our money or else cause a scene until we agreed to pay a ridiculous sum to shut him up.  We were informed that the police would be of no help. As she walked us out the door she told us a story of how she had to hide from a murderous cab driver behind a dumpster so he wouldn’t find out where she lived. Fun.   Before you start to wonder where we booked ourselves for the night, her hostel is in the guidebooks and came highly recommended by other backpackers, its full of letters previous visitors have sent her and her young children were climbing the mulberry tree in the courtyard when we walked in. As we set of through the courtyard she yelled after us a final reminder, “Remember, don’t talk to anyone! And, don’t let anyone follow you here!”

Out for the afternoon we encountered no problems and were not particularly worried about running into Niecco or his friends. However, as we walked around The Ark we found that the backside of the building is the hottest spot in Bukhara for junkies. The area is littered with needles and, strangely, lice combs. We also walked past the hood of a car overturned behind this world famous monument completely engulfed in flames. It started to get dark so we set off in the direction of our B&B when I started to notice that all the street lamps were off, looking at the base I noticed that the wires had all been pulled from the poles. It was ‘Uzbekistan’s Children’s Day’ so the streets were teeming with children and ice-cream wrappers, yet the city had an eerie abandoned look because there were no adults, it was as if the children from The Lord of the Flies had built up a massive castle in the desert and were now running around the alleys playing games.

Did I mention that Bukhara is world famous for its torture, prisons and public executions—but that’s another story. Needless to reiterate, our first night in Bukhara was a bit strange.

One thought on “The Bukhara Underbelly”