Prior to the Mongol Rally’s official launch, several dozen teams met the night before at the Goodwood Estates camp ground. To amuse the eager rally goers, a soccer game was set up. A full 20+ ralliers participated in the round-robin tournament. The goal was a bit of a boot camp training session for the real game, which will take place in Mongolia against the Mongolian national team in six weeks. This boot camp was not for the weak of heart of faint of spirit, for it began with the sergeant of the camp pulling two giant buckets of ice out of the back of a van and piling in roughly 100 beers. Now the ralliers had incentive. The winning team gets double the beer. We signed up.

Everyone broke off into teams of five or six to play five minute games against one another. As we were all standing together, the Abandon the Cube team of Lauren, Mike and Bill were lumped in with a random Canadian and an unfortunate Dane. We chose to call ourselves the ‘Colonials.’ Our team was up second. We pulled on our white jerseys and ran into the field. Having broken into the beer early, each jarring step while running made for an interesting sensation. It wasn’t since the Hash House Harriers of Beijing that I’d been drinking and jogging simultaneously. We doubted we’d even survive the first round.

Game one was a loss. We played poorly but everyone on the team displayed a bit of hope. Lauren dove in front of the goal to block a hard kick by the opposing team. Mike was knocked off his feet and rolled through the grass and back on his feet in a matter of seconds. Bill charged at everyone with such speed they often simply left the ball and ran the other way. The Canadian seemed fearless, and the Dan was the only one with any real soccer skills on the tiny Colonial team.

Game two was a tie. That was better anyways, and midway through the game Lauren tackled another player and earned the nick name ‘tank.’ Game three was a win, and an epic one at that with Bill scoring in overtime. Game four was another win and then the championship game went into overtime and we scored first. Take that, you overly serious Brits! And for the rest of the rally what you call ‘football’ shall hence forward be known properly as soccer. Your welcome, Goodwood, and we’ll see you in Mongolia when the Colonials take on the Mongols. 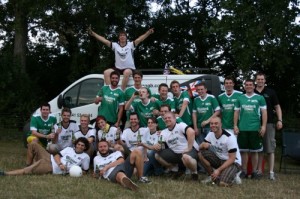