Our ship docked in Ft. Lauderdale, Florida, USA and we hightailed it to the closest Amtrak station. From there we bought tickets on the next north-bound train and then waited at the station for five hours until it left. What we thought might be a scary experience turned out to be a good time, people came up simply to chat with us and ask where we were from. 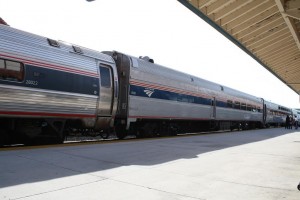 Amtrak is a special kind of transportation. It takes great patience to navigate the isles of any Amtrak train; you’ll saunter past drunks, felons, children, people so large their bodies cascade over the arm rests, and hill-billies. We encountered all of these on our 15 hour ride to South Carolina. The most noteworthy incident being the act of purchasing two $6 dollar sandwiches with rotten salad and fermented cheese and then listening to a group of hill-rods discuss politics as they stuffed handfuls of chips into their mouths.

We arrived in Columbia, South Carolina at 4am. Now, for people not from America, 4am is not the best time to be walking around near train tracks. Nevertheless, we forewent the ridiculous cab costs and decided to walk to a hotel. Little did we know, Hurricane Ida was swooping towards Columbia in full fury. We were about a mile from the train station, loaded down with our backpacks (which, funny enough, we had weighed in at over 60 lbs each) and additional bags for our carry-on luggage. In short, we were carrying about 80lbs each. It started to drizzle, so we got out our umbrellas and thought nothing of it. Then the rain came in harder. Then the rain came in sideways. Then the rain came up from the ground, and circled around us, whipping our hair into our eyes (well, mine, not Mike’s!) and drenching us. We ducked into a bus stop to wait it out. It was 4:30am.

We sat in the bus stop, frustrated, soaking wet, and shivering. I had just finished reading a Bill Bryson book that detailed how people die from hypothermia. This wasn’t looking good, and to top it off we were waiting in a bus stop in the middle of town with no hotels in sight.

At 5:00am a lone bus rushed past us and then slammed on its breaks and backed up to the bus stop. Two drowning rats looked back at him with saucer-like eyes. He urged us quickly in the bus and then navigated to a place in town where we could wait before jumping on a connecting bus at 5:30 to reach the hotel area. He was so friendly and chatty that we warmed up simply from being around him. The connecting stop came all too soon and we were back out in the rain (which was coming now, it seemed, from all directions as if targeting only us).

One umbrella was totaled, having been turned inside-out by a gust of wind. The other was being peeled from the frame by the sideways rain. As ridiculous as it was, it became funny. We waited under the overhang of a Exxon gas station until a rather unfriendly lady told us to leave, “we have a no loitering policy.”

The bus was late, but once it finally arrived we were so happy we didn’t care. We jumped on board only to discover we were the only people of European decent riding that early. The driver, a friendly and talkative lady, began to sing religious hymns, and the bus was her congregation, they followed along until the whole bus was singing. Each time the driver came to a new stop she said goodbye to everyone by name, and picking up new people she tried to learn as much about them as possible. I wont say she was an angel, but as ridiculous and drenched as we were she swooped in on her bus and saved the day, then cheered us up with a sing-along to boot.

She dropped us off at the front door of our hotel and even pointed out a few places we might want to shop or eat along the way. At the hotel, a friendly receptionist allowed us to check into our room, which we had reserved for later that day, at no charge. Not ONE other place we have traveled would have allowed us to do that!

So, what do you need to survive the East Coast alone, over burdened and drenched at 4:00am? Columbia City bus drivers and hotel staff so friendly and caring they bend the rules to help people in need. It is so good to be back in America, by far it is the best place we have traveled thanks to how much locals help out.

One thought on “The East Coast Survival Kit”