Recently, I’ve taken the Empire Builder from start to finish a total of three times, that’s around 6,600 miles! 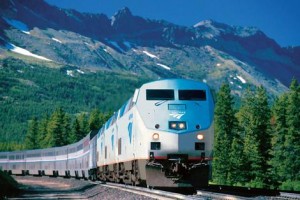 Traveling by train is an activity that requires great patience, but if you are looking in the right direction you’ll see much of what America is renowned for without getting out of your seat. The major cities of Chicago, Minneapolis and Seattle lie along the route, as do the amber waves of grain. Purple mountains of majesty sit majestically in the background while the fruited plains of Washington pass by. Rocky rivers, waterfalls and lakes all flash past the Amtrak window. As I sit on the train I have full visibility of the sky above, the massive expanse of land out my window, and the knowledge that those flying overhead above me are sorely missing out. It takes roughly 48 hours to cross the Empire Builder, and in the time you’ll witness a sunrise and a sunset (probably both in Montana) with snowy grasslands spotted in geese, or farmers plowing their fields and pausing to pet their trusty Labrador. If you are not in a hurry, and you can appreciate the little things in life, than you’ll appreciate a trip through the heartland by rail.

When I tell people I take the train across America, I’m usually met with laughter or a Bill-Clinton-like sad smile and a sympathetic, “I’m Sorry!” This rubbed off on me a bit, I’ll admit, and I was not looking forward to my third, 48-hour journey in as many months on Amtrak. After boarding my car, however, it took no time at all for me to be refreshed with the excitement of travel and the amazing views of the Mid- and Northwest. Between Milwaukee and nowhere-town North Dakota I sat next to a US Air Force officer who had been stationed in Korea for the past several years. He had driven his car to St. Louis to be shipped to his next duty station and was returning to his family in North Dakota to pack up his modest home and move to Alaska. This gentleman regaled me with stories of life in Korea, and even flipped open his laptop and gave me a military-style briefing on the DMZ (demilitarized zone along the 38th parallel). Two months ago on a previous Empire Builder experience I sat next to a woman from the Dakotas whose husband has recently passed away. She was visiting her daughter in Seattle after the funeral and talked to me about what a wonderful man her postal-service husband had been, and what she would do now that she was alone (teach Opera appreciation at her local college). Even further back, I met a girl who had been in prison for assault, only recently released and heading home—I can’t say that was a meaningful experience for me, but it was a part of America I had not seen before. Encounters with people on Amtrak are not always easy, but they are always memorable and for the most part these movable parades are a cross section of society that few get to really appreciate.

As we pulled into Seattle, where the tracks follow the sound so you have a mist-covered view of the water with mountains in the background, a bald eagle emerged from the mist and flew alongside the train. You’ll not find anything as mystical and beautiful as that from a tiny airline window.