The Epic Return to Deutschland 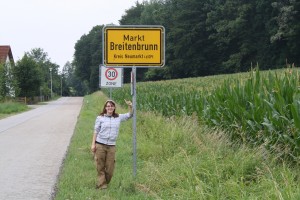 Having spent a great deal of my youth in Germany, my ten year absence made me wonder what would have changed since I graduated high school there at the beginning of the millennium. What made it all the more exciting was that this time around I was old enough to drive! We set a course for Heidelberg, and drove through the countryside in relative silence looking out the window. Stores I recognized passed by the window, and once again street signs in a language I could read were a real comfort having left France and Belgium in our wake. Nostalgia floated in and I daydreamed about the six years I spent in Germany. We set up camp in Heidelberg that night at a campground directly on the Danube. Somewhere in the hills behind us, church bells rang and the hills on either side of the river displayed proud, traditional German homes. The air was clean and easy to breathe.

We awoke early and had to get a move on in order to make it to the party in the Czech Republic that night. We strapped everything to the roof and set off to Nurnberg, only a few hours away. Having driven little on the trip thus far I decided I really wanted to drive the autobahn as we ventured towards my old stomping grounds. I am still learning to drive stick, so it is a bit more involved than simply putting on a seat belt and pointing the engine end forward. I got the hang of it after a few minutes and enjoyed the drive, Audi and BMW cars zipped past me with annoyed looks, but I wasn’t phased. Even if I’d wanted to go faster, our little Citroen Saxo can’t muster more than 60. That’s why they have the slow lane.

Nurnberg is a beautiful city, one I used to visit on the train from Parsberg. This time, coming in via road, it was totally different and I was disoriented. Nevertheless, we found an ATM and in the distance I spotted something of extreme value and interest. I wasn’t sure I’d seen this mirage correctly, so I paced quickly ahead. I let out a wild scream and turned around to see Mike and Bill standing shocked behind me on the pavement. “Weinerwald!” I yelled, and they agreed to have lunch at one of the best German chain restaurants in the country. We ran in, and I videotaped and took pictures of the food, then ordered and waited giddily for my food. What a treat, and I’d heard all the Weinerwald shops had been closed since we left ten years ago.

From there, we set off on a detour to Britenbrunn, my old town. We found Parsberg and I noticed how much larger it has become. Britenbrun was no different. The old military families were no longer there and a civilian German owned our old house. She was there so I talked to her briefly, but she wasn’t amused to find a car full of Americans, covered in stickers and flying a pirate flag, in her driveway. I took a few snapshots and told Mike and Bill about my time in the house and in the neighborhood while they looked out the window at the town.

But, with time running short, we had to jump back aboard and head to the Czech Republic, flag flying high and flapping in the wind at 50mph on the autobahn as sports cars zoomed past.