If you follow us on Facebook, then you’ve probably noticed the bad-ass photo of Lauren on a motorcycle. Here’s how that transpired: 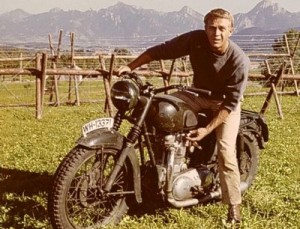 So it was Christmas morning, the morning after an insanely busy night of serving rowdy Chinese at the bar. We were exhausted and slept in, unlike most Christmas tales where people wake up and run to the tree. We woke up and ran to the coffee. Then Mike started fidgeting and eventually yelled “I can’t wait!”

We ran outside and there next to the grey brick wall was a shiny red motorcycle. . . well, motor-scooter. It’s an electric bike actually with a range of 30km and a max speed of 30km per hour. It’s beautiful, not unlike the motorcycle from The Great Escape. Side note: did you notice that the bike used in the film was actually invented AFTER the supposed date of the film. Major movie flaw, but still you can’t hate Steve McQueen.

So, our first day out on the bike we didn’t charge the battery fully and it died about 3km from the house. A long, embarrassing walk pushing a giant scooter. The second day out we were waiting at an intersection when a local blew through a red light and T-boned the bike, obliterating the fuselage and jolting the frame. Lauren was driving, so she yelled “Get off! I’m chasing him!” and then took off at full speed (30km per hour mind you) chasing the hit-and-run asshole. She yelled, he drove faster. Eventually she sped up enough to ram right into the side of the terrified man, knocking bits of his bike into the air and finally forcing him to a grinding halt when she pointed the nose of the busted red beauty directly in his escape path. The man then had no choice but to either face the wrath of a woman with a busted Christmas gift or to call the police. He chose the police. 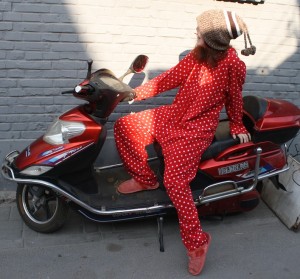 They arrived leisurely and overweight, and refused to talk with us. He listed to the Chinese man and then said there was nothing he could do. We insisted the man had not only run a red light, but did a hit-and-run, and was now lying to a police officer. It looked (and sounded) pretty serious. Finally, the lazy cop sucked in his paunch and called his home-base. After a long conversation he reported that the traffic camera showed the Chinese man breaking several laws, and slamming into two foreigners who were breaking none. He sighed and told us to name a price.

This is where it got even more uncomfortable than chasing down a hit-and-run culprit Bullit style. We had to pick a price, out of the blue, and the cop was mitigating and managing the amount. He then would tell us if the price was too high. We demanded the man pay for a new bike or a new fuselage and estimated over a thousand rmb (slightly more than a $100 USD). The cop laughed, and by then a massive crowd had gathered who also laughed in support of the hyena cop. We lowered our bid, there was more laughter. Finally we said we would go with the man to a body shop and accept the estimate amount. The cop agreed, wrote out a slip and was off to serve and protect in another quarter.

We eventually ended up with 300RMB, not enough to fix the bike. Still, it was our first encounter with the legal system and with the police in China and although it wasn’t pleasant it could have been much, much worse.

One thought on “The Great Escape… Beijing Motorcycle Edition”