In typical fashion, Mike and I had an impulse one afternoon and decided to see if we could go up to Mongolia to renew our visas. In China on our tourist visas we could only stay in the country for 90 days at a time, and had to vacate the country every 90 days in order to stay legal. Our legal time was running out on our current stay and we needed to exit the country fast. Usually our companies sent us to Hong Kong, which is a cheap trip with a quick turn around so we can be back in the office, exhausted or not, in less than two days. 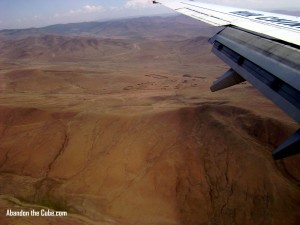 Our impulse was to see if we could convince our companies to send us to Mongolia instead. It was a bit of a reach, but somehow– it worked! It would be slightly cheaper to go to Mongolia than Hong Kong, so we sold them on that idea. Once I had the okay from my boss, I had my company secretary book our flights and called Mike. He agreed, told his boss he would be in a yurt in the north, and would try to be back Monday morning. We rushed home, threw a few shirts in a bag and headed outside. After a quick stop to buy hiking boots we were at the airport, maneuvering through security. We knew virtually nothing about Mongolia, nor did we have a guide of any sort.

The flight to Ulan Bator, the capital, was tumultuous and terrifying and I felt exhausted when the plane finally touched down on a sand-covered runway. The Genghis Khan airport had one entrance for planes and one exit for passengers, we exchanged a bit of Chinese currency for Tughriks and grabbed a cab to the city center to hunt for a hostel. Our cab driver had gold teeth and tried to swindle us for almost triple what the fare should have been. We paid a reasonable amount amid loud, crow-drawing complaints and entered a hostel.

We spent the rest of the afternoon walking around Ulan Bator, sucking in the worst pollution imaginable and starring at broken down factories and dejected, sad looking locals. It was truly the most depressing city we have ever encountered. Vowing to get out as soon as possible we returned to the hostel, packed out bags and headed to the bus station.

Backpacking in Mongolia visa
Previous PostInto the Wilds of Mongolia Next PostApartment Hunting in China: Finding Home in Shanghai

3 thoughts on “The Great Mongolian Escape”