The Historic Titanic and Mayflower Passage

We left the Brooklyn docks in the intense heat index of 110 degrees F on July 6th.  Hauling our backpacks, chalked full of (almost) everything we needed for the Mongol Rally – ranging from clothing and safety equipment to Russian phrase books and a toilet seat.  Needless to say, we were a rare sight on the Cunard’s Queen Mary II.  The very first day on board, we headed directly to the ship’s library and I perused the nautical history section in detail.  I read through early pirate history along America’s coastline, read about the crossing of the Titanic – White Star is now Cunard, and I also came across a great book about the Mayflower and a history of the pilgrims before they left the England and Holland.

Attending lectures by John Maxtone – Graham, author of The Only Way to Cross and Liners to the Sun, by day and

The Route of the Titanic’s Voyage

concerts and balls by night, Lauren had our entire days outlined by 8:00 the previous evening.  Graham gave extremely interesting portrayals of the History of Cunard, the building and crossing of the Titanic, and life on-board crossings during the 19th and early 20th century.  These lectures and histories really opened our eyes to the amazing way we started off our journey, which would / will eventually take us to Europe, Mongolia, and eventually Southeast Asia.

I eagerly watched the satellite image of the Queen Mary II cross over the final resting place of the Titanic 2.5 miles below our feet.  I walked up on the deck of the ship and looked out at the water realizing how much difference 3 months makes when cruising the North Atlantic.  I looked out over a foggy fairly calm sea in a humid 74 degrees Fahrenheit.  We had fog, but practically no fear of icebergs in July.  In April of 1912, we would have seen our breath in the cool air and the icy waters below. 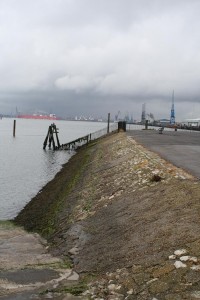 Southampton, England, where the Pilgrims gathered and departed for America

After crossing over the sunken wreck of the Titanic, I read daily about the preparations the pilgrims made to come to America.  I read with great interest as I learned things which I had never been taught in school about the pilgrims crossing.  There had originally been two ships one was called the Speedway, which was purchased by the exiled pilgrims in Holland when they grew impatient with the negotiations with “sponsors” in England.  By the time they had arrived, a company called the Merchant Adventurers had purchased a ship called the Mayflower for their voyage.  There was great turmoil between the pilgrims and the Merchant Adventurers, who aimed to profit off the fishing around the new colony.  My previous understanding had been that they simply could go where ever they pleased in the New World, however in fact, they had to get land patents granted by the crown.

There were also accusations that Holland, who had claimed a right to Manhattan Island, attempted to delay the pilgrims and keep them away from the New World because the Pilgrims’ land patent was at the mouth of the Hudson River, which was too close for comfort.  There were many more facts which I will spare you that I found interesting about their voyage.  It was slightly amusing as I pulled my head up from the book, reading about how the Mayflower was in a turbulent storm in the mid-Atlantic and how the crossing took 60 plus days.  I, on the other hand, looked around took a sip of beer and listened to children laughing in the pool in front of me and was also in the Mid-Atlantic after just 4 days.

Once we arrived in Southampton, I discovered it was only a short walk with all of our gear (in much cooler weather than in Brooklyn a few days ago) to the Mayflower monument. We headed that direction and a wave of fascination swept over me as I looked up at the giant stone monument to the Mayflower crew. Strangely, there are bronze signs for many people on board but not for my ancestor, William Bradford. Hopefully after the rally this is something I’ll be able to remedy.