The Longest, Most Corrupt Train in Central Asia

After sleeping in the Almaty-1 train station we boarded our first Kazakh train at 5:12am bound for Tashkent, Uzbekistan. The train arrived a bit early and no one knew which car or cabin we were meant to be in, and in our limited (ok, non-existent) Russian we had a bit of trouble finding our births. Once situated in car number 9 we discovered we were meant to be in bunks 13 and 16. A very old, very sickly man who was thinner than a pencil and paler than paper was sleeping fitfully in my bunk while a giant, fecal-covered bag was resting on Mike’s bunk. The train attendant/scariest looking man on the planet approached us and heaved the heavy bag up over his head and threw it atop the birth above ours and ordered us up into two bunks. He came back five minutes later and demanded 700T from us to buy sheets for the bunks. I doubt anyone else paid but seeing as he was the largest shirtless Russian we’d ever seen we forked over the money (we later learned everyone did indeed pay for their sheets).

I’ll pause here to describe the train. Once in car 9 we were met with the most pungent aroma of vomit, human sweat, excrement and burnt hair. The smell was so string it made the skin around my eyes itch. The interior was paneled in fake wooden siding with bunks 2 high with a third bunk for baggage. Nowhere were there safety rails or hand grips. The tiny isle held additional bunks which doubled as benches. The bathroom was a tiny room with a stainless steel western toilet that was so stained and textured from years of use that it looked like a rusty old ship port hole.

Somehow, and probably because we had not really slept in the train station the night before, we fell asleep in our tiny bunks (so thin in width that you had to lay on your side or you’d roll onto the floor and get hepatitis. Throughout the night we made long stops in the middle of nowhere, literally the train would stop in a field and then, at random, take off again. By 8am the lights were flicked on and we rolled into a station for a brief stop only to discover that we had only gone about 20 miles down the tracks. Amazed, Mike set off to ask someone when we arrived in Tashkent. We had heard that it was a 12 hour ride, but that turned out only to have been true several years ago. Instead of arriving 12 hours later at 5pm we found out we would arrive 24 hours later at 4am the next day. We had no food, only a little bit of money in Tenge and the smell of vomit was making us nauseous. 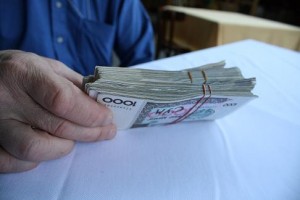 Around late morning we made a stop and watched as everyone looking out the window panicked and dashed into their bunks. Even the sick old man pretended to be asleep. Several guards in elaborate uniforms got on board and talked briefly with the giant train attendant/giant before marching straight up to us. “Passport! Declaration.” We showed him our passports and he forcibly took mine out of my death grip on it and rushed down the isle. We could not both chase after him and leave all our bags, so Mike followed him. What ensued turns out to be a common occurrence on Kazakh trains. The man took Mike into the giant’s cabin and closed the door. He then patted Mike down and took all the money in his pockets, which turned out to be about $2 USD. Luckily the bribe-seeking Kazakh did not find the money belt containing hundreds of RMB. Mike took the event in stride and laughed about what a crappy bribe the guy got away with as he snatched my passport back from the cop and quickly returned to our cabin. From there after, at every stop we would watch for guards and, if we spotted any, we jumped into our bunks like everyone else and pretended to be asleep.

Around 10pm the giant (he had acquired a shirt now, but had it unbuttoned) gave us declaration forms. He found a translator who asked us if we had any money, any at all. Obviously after the bribe incident we lied and said no. This turned out to be a brilliant idea. They said we had to write something so we listed the guitar and computer (after he asked several times if we had one). We later found out the “translator” was a guard who was trying to get close to us to find out how much money we had left, as well as what other valuables.

When we approached the border of Uzbekistan, Kazakh officials border the train and again asked if we had money. Again we said we didn’t. Having not slept or eaten in almost 24 hours our sense of humor was weaning. They made us open our bags (but did not notice three of our 5 bags so did not search them and only ended up looking in the most boring bag full of clothing). They did a swine flu check and inquired again if we had any money or valuables. We kept saying no, insisting that we were planning on using our credit card (I had a deactivated card to show them just in case they stole the card). After a ridiculously long search of everyone’s bags on the train minus those of ours hidden on the top bunk, we saw a young Russian boy of about 17 taken into the back room and frisked. He lost several hundred T. We saw another man walk right up to the Kazakh guard and put a wad of bills into his hand and then point at his bag and walk away. The guards did not search his bag. We saw the old man from our bunk hide a box under his bunk and a boy of about 20 kick a black bag out of site while being searched. As we rolled away from the Kazakh border I had the feeling that everyone was transporting something illegal except us.

Fifteen minutes later it was 4am and we were rolling into the Uzbek guard station. The people on the train seemed less stressed and said the Uzbeks were not as hard to get through. Everyone stashed their secret packages and the old man revealed, mid-stretch, that he had stuff taped across his entire midriff. The Uzbeks had a nurse come take our temperatures and check our passports while a drug dog went around and terrified everyone. This was the first drug dog of the trip. The Uzbeks were friendly and efficient but again only searched one of our bags. They took no bribes and did not intimidate anyone. After we rolled away from the border we arrived in Tashkent thirty minutes later.

One thought on “The Longest, Most Corrupt Train in Central Asia”