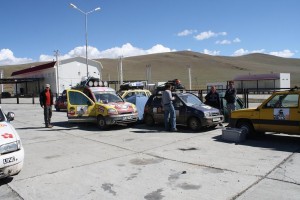 From the previous post you learned we had trouble getting through the various windows to get through Mongolian customs and border control. In fact, they were holding us (and about 20 other teams) in a cement and metal pen off to the side of the compound. We walked around asking what was going on and the other ralliers in the pen were livid and dripping with anger. The anger was raw and bubbling to the surface the longer the ralliers were held there. Everyone was lying to them and keeping them against their will in an inhumane pen, when all they wanted to do was get to UlaanBataar to donate their car and the money they had raised for charity. It was a classic case of doing good and being punished for it, they felt. I walked around talking to various teams for several hours. The consensus was that we were not getting out any time soon and that there was nothing to do but wait since we had literally no idea, as a group, what the problem was. Some teams had already called the Adventurists and reported that the adventurists had to pay a $900.00 fee per car to import them legally into Mongolia. The Adventurists said their bank account was not sufficient to pay for all of the cars at once, and indeed could only pay for a handful of cars each day. Another team heard a similar story but that they were drawing the money out of an account that had a withdraw limit per day, thus only a few cars a day could go through. The border guards refused to let the ralliers go on good faith, assuming the Adventurists would pay eventually. Meanwhile, the Adventurists distrusted the guards and refused to pay for teams that had not yet arrived since they thought the guards would keep the money and hold the ralliers. It was a catch 22. Apparently the Adventurists thought this arrangement was acceptable. The ralliers being held in a cement pen disagreed. 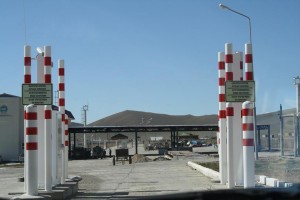 The first day, we arrived in the pen around 11:00am and once we figured out we’d be there a while we set up our tents to get out of the harsh summer sun. At night, we were told, it would drop to well below zero. Mike did not have a sleeping pad, so we dumped all of our clothes on the floor of the tent to make a bed to keep him off the cement. I ripped the back seat out of the car as my sleeping pad. We set up, expecting a freeze that night but sweating profusely during the hot daytime hours. Card games were played in the shade of the cars and another team had a poker game going. Someone had a guitar, and music was played until his fingers were sore, then the Belfast boys put on their Ipod and aimed the speakers at the compound.

We learned that we could leave but the cars couldn’t. Technically, then, they were not holding us against our will. We left the car in the holding pen and walked into the small border town. Not surprisingly, the locals took their cue from the guards and tried to rip us off. They charged triple the actual cost for anything we needed, knowing we were being held in the pen and needed food and water. Teams paid ridiculous prices for sustenance. I was too stubborn, so Mike and I cooked on our tniy stove in the holding pen and ate ramen.

That night, it did get cold, but not as cold as the previous night. The border guards came into the holding pen and several ralliers fell into their palms like sheep. They were obviously looking for hand-outs in exchange for supposed favor in the morning’s car pick (remember, only so many cars can go through a day). Ralliers fell over themselves sucking up to the guards, and put them in the limited camp chairs, stuffed American cigarettes in their mouths and poured them shots of good vodka. Mike and I didn’t participate, knowing they would leave and laugh and not give any favor in the morning to anyone who had given them money or gifts tonight. It was sick to watch the people who were the angriest and meanest in the pen, now sweetly talking to the guards and handing them coloring books for their children. At one point, the guards offered to bring in several Mongolian women if the ralliers were bored. Did I mention I was one of only two women in the holding pen? I was sickened by the whole show and went into my tent to read.