The next morning we awoke to the sounds of horses. Billig had brought in a rather large brown horse for the evening, and he had strolled around the yard all night eating every blade of grass and then leaving large piles of evidence strewn about, which the two dogs were rolling in when I stepped out of the yurt. I walked near the horse to say hello, sleep still in my eyes. The horse pivoted with such grace and speed that I hardly had time to react before it shifted all its weight to its front legs and kicked ferociously back with both hind legs. Mike was just stepping out of the yurt and yelled a too-late warning. The back leg kicked millimeters past my fragile skull and landed harmlessly back on the grassless ground. Startled, I realized that this was the second near-miss by a horse in as many days. 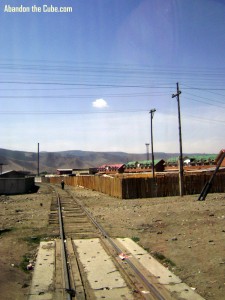 Nevertheless, we asked Billig for horses for the day and walked into town while we waited for our mystery meal and for Billig to collect the horses from a friend. In town (which was a good mile hike) we bough the necessary provisions for a long ride, namely, a giant bottle of vodka and some orange juice to mix it with. On the mile walk back, we split the two bottles half and half and set about emptying them into our bellies. We were starving, our stomachs were raw from devouring mysterious substances for the past several days, and in town we could not find anything other than a large round loaf of bread to purchase for sustenance.

Back at camp we had carrots and noodles spiced with a tar-like substance I can only imagine was reheated dog. We chewed on wild onion shoots and looked across the kiddy table at each other. Mike looked ragged, tired and diseased; dark circles nearly eclipsed his blood-shot eyes. Still, he was an attractive man and I could not help but smile at what he had gone through the previous night for me. Wife had served a bowel of raw yogurt to the both of us, being lactose intolerant Mike slyly ate both his and mine, and as a result had spent the evening frequenting the outhouse via flashlight. Romance at its finest– or at least, romance on the steppe.

Billig returned with two horses, a small brown one which I presumed was mine and a large glorious grey one which could only, in this male chauvinist culture, be meant for Mike. Billig was not alone; he had a rather cheery Asian accomplice with him who he introduced as his Japanese friend. The two had met while Billig was looking for gold with the American. I wanted to learn more about the gold hunting, but would wait until later to ask.

Billig and the Japanese man (who was in a purple track suit) pulled out several bottles of beer and poured glasses for the men. Mike interjected and calmly and politely explained that white women also drank. Everyone in the yurt thought this was amazingly funny, and the Japanese man laughed as he poured me a full bowel of beer. We clinked and clanked bowels and all downed our drinks. Wife sat in the corner laughing and batting her eyes at Billig. He asked her to drink, but she said it was bad for her skin, and declined.

We drank several beers before another strange man arrived. This man was clad in traditional Mongolian gear, with a large cloth jacket tied on with a sash belt that also held a giant dagger. He wore a cowboy hat and had a long blade of grass between his teeth. He was fairly handsome, and Wife blushed as he walked in. Billig introduced him as the horse man, the until now supplier of our previous day’s brutes. Billig also explained that his wife had a massive crush on the cowboy, and he poured the man a bowel of beer and joked that his wife would someday ‘change to the other one,’ meaning the handsome cowboy. I thought that if Marlboro could have signed this lad, they would have won as many hearts as smokers. The man had brought the horses for us while we were off gathering booze, and had returned with saddles. It had started to rain and he and Wife went out and collected the saddles and set them in the yurt.

We drank a bit more, chewed our dog meat, and then the Japanese man in the track suit asked if white women also gambled. Mike assured him that they did and I found myself playing a very confusing local Mongolian variety of poker. Somehow I managed to beat Billig, though with the Japanese man’s help and constant cheering to assist me.

Tipsy and a bit lethargic, Mike and I mounted our horses and decided to go as far into the valley as we could before sunset. Already it was 11am and we were on the verge of being useless thanks to the endless bowel clanking. Wife set off across the fields with a bucket and the cowboy, Japanese man and Billig all got in a small white car (when had that arrived?) and took off spinning in circles, across the fields for town.