The Night Train to Bulgaria

We decided to take the night train from Istanbul at 10:00pm across the western boards to Bulgaria. We planned to disembark before Sofia in Bulgaria’s most relaxed city, Plovdiv. The train pulled into the station in Istanbul an hour early and we began to panic a bit at the sight of the metal beast. It was covered from head to tail in graffiti and the conductor was hanging onto the outside of the train, with his right arm reaching into the train presumably to steer. We immediately had a flash back to the horror we experienced on the Kazakh trains that looked equally rusty.

Nevertheless, we loaded ourselves into our compartment. We had spent a bit extra for a sleeper cabin for the three of us, so we were thrilled about the train ride. We talked with the cabin attendant, who ended up being the nicest person we’d met in recent weeks, and he helped us get settled in. Our cabin had three bunks, a small table, and a door to block out all outside sounds. It was perfect, the cabin attendant wasn’t corrupt, and the train left exactly on time. What more could one ask for? 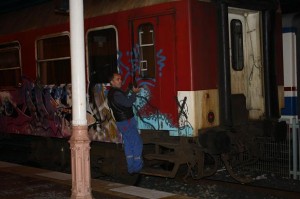 We played cribbage for a few hours and drank a bit of the Cpt. Morgan I had received for my birthday a few weeks earlier. When the tracks began to deteriorate and the clock struck midnight we decided to crash for the evening and I scampered up an unstable ladder to the top bunk.

I woke up at 5am with a start realizing we were not moving. The cabin attendant came into the room and told us we were at the Bulgarian border, and to leave all of our belongings and follow the crowd to customs and border check. This was the first time that we had been asked to disembark from the train for customs, and we were a bit hesitant to just leave our belongings in the cabin. Without other options, however, we grabbed our passports and stood in line to receive a big blue stamp in our passport. “You have now exited Turkey”

I fell back asleep in the top bunk almost as soon as my head hit the pillow. I knew we had to be awake in ten minutes to go through Bulgarian customs and border control, but it was impossible to stay awake. I woke up with my arm outstretched and a Bulgarian military man grabbing the passport that was still in my clutches as I slept. He smiled and stamped the page and put the passport back in my hand. I stuck it under my pillow and was asleep again before he got the cabin door shut.

We arrived in Plovdiv by 11am and since we had no Bulgarian Leva to walk to Old Town to find our hostel. We got lost a few times in the winding, cobblestone streets and I got to try out my Russian again after a month of hiatus to ask how to get to Old Town. We found it after a long, grueling walk with our packs and were overjoyed at the atmosphere at the hiker’s hostel. People were milling around, playing cards, reading and just chatting. We dropped our stuff and started chatting with people to hear their adventures. It turned out one of the guys in the hostel (who had also been on the night train) was in Cappadocia with us a few weeks prior. Small (traveler’s) world. We settled in to enjoy a relaxing day and see the town in the afternoon.

2 thoughts on “The Night Train to Bulgaria”