The Oregon Caves and the Mystery of the Greyback 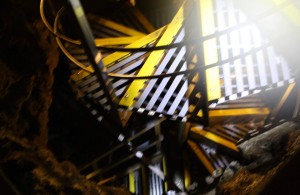 After a great two days in Eugene, we packed up the old trusty mini van once again and decided to hit the road and head south. With all four of us in the minivan, things were lively and the drive flew by quickly. We reached the creepy town of Cave Junction around 10pm and decided to see what these Oregon caves were all about. Mike ran into a terrifying-looking gas station to ask directions to the caves. They replied, “its near the greyback.” Mike nodded knowledgeably and ambled back to the van to report the directions. We sat in the van blinking at each other. “What’s a Greyback?”

After passing several casino games, we pulled into Cave Junction’s only hotel where a lady with 1980’s makeup and shoulder pads so large they hit her in the ears told us to head for the greyback to find a camping spot. She gave us a free local newspaper (aka, a tiny pamphlet of nothingness) and pointed up the road. “To the greyback!” We repeated her mantra back to her with a bit less gusto, “to the greyback?!” and made our way out the door.

Eventually, after a beer stop and a few more inquiries, we decided to just find out for ourselves what this mysterious greyback was. Twelve miles up a horribly-constructed road we found a campground and Mike ran past a “CLOSED” sign to inquire again. From deep in the woods a woman’s voiced yelled out, in true Goonies style, “We’re closed!” and then a dog began to bark very close by and Mike and his friend sprinted into the van. No help at the camp site. We drove back down the road and saw a lit phone booth. A mirage in the woods that seemed beyond creepy. I took a picture (yes, its on flickr, no it didn’t turn out very well because the car was bumping along a dirt road as I took it). It turned out the phone booth belonged to a man who ran a camp site. Score! He installed us in an RV lot for 16$ and we set about making a fire and cooking our dinner. Only after we finally figured out how to assemble the tent did we realize the rain cover was full of holes. 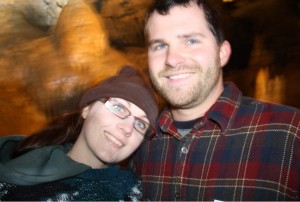 Mike and Lu in Oregon Caves

In the morning, the forest seemed only slightly less creepy. We packed up our camp site  after making some breakfast on what was left of the fire, and headed deeper into the woods to solve the mystery of the greyback. You just can’t stop for intrepid explorers eager for discovery.

The Oregon Caves system is a national monument. And we learned from our 90 minute tour of one of the caves that a monument is a presidential decree rather than an act of congress.  Hopefully that helps you down the road in bar trivia. Our national monument ranger wore the typical OD green suit and funny ranger hat, and talked to our group of adults like we were perhaps 6 or 7 years of age. She told us stories in a drawn out tone, and even called us kiddos. She led us deep into the heart of a cave, some 200m underground. It was a dark, creepy and yet beautiful experience. Unfortunately, in our attempt to preserve the cave someone cut it all up to put in cement floors, stainless steel stairs, railings, ramps, lighting, cables for lighting and emergency exits. Its really not much of a natural thing anymore, its more like a movie set on Batman. My hypothesis– if humans find it, its screwed.

Nevertheless, we enjoyed the tour through tiny, musty cave rooms that looked very strangely like our first apartment in China. We scaled up and down slippery steps, around hanging stalactites and over pointy stalagmites. We even had to duck once. Eventually we left the caves without interacting with any live nature, and we drove back through Cave Junction (still creepy in daylight) and onwards towards California. While we never did learn what a greyback was, some mysteries are better left unsolved.