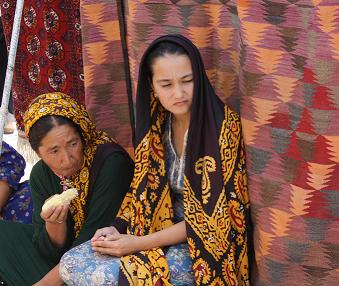 For many Silk Route travelers, the Push-Push bazaar outside Ashgabat is one of the greatest highlights of the road. The bazaar spans several square acres and includes a livestock bazaar, car bazaar, construction section, clothing, fabric and national arts and crafts. Anything you can imagine wanting can be found at the bazaar. Opened on the weekend and on Thursday, the bazaar is teeming with people from every walk of life in Turkmenistan. From agile old ladies grinning rows of gold teeth to young boys pushing portage carts.

I arrived with a friend at 11:00am on a Sunday, Mike having decided to stay behind for some extra computer time. The parking lot was little more than a collection of hundreds of cars in various states of disarray parked along and atop the rolling sand dunes that surrounded the enclosed bazaar. We added our jeep to the pile and set of across the dunes towards the main entrance, a lavish two story entryway crawling with people. Within moments of entering the bazaar we had been spotted by a gang of pick-pockets, who use a system of distractions and bumping to pry valuables from unwitting shoppers. I walked ahead of my friend, snapping pictures, all of my valuables in my camera bag at my hip. Behind me, my friend watched my back, turning suddenly every once in a while to catch some young man suddenly very intensely studying a tire, or fabric, or whatever was at hand. It was a hilarious parade of obviousness, with the pick-pockets eventually losing their patience and trying to blatantly reach into my camera bag. They got nothing and our system, albeit an old trick, was effective in deterring them. 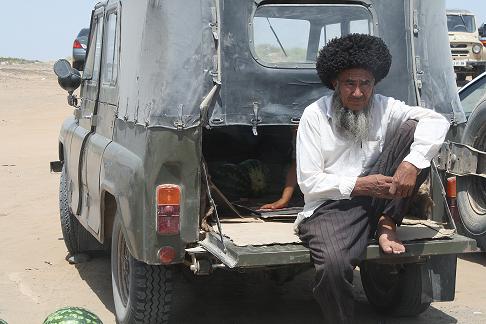 The bazaar itself was well worth the visit, and remains one of the most astonishing collections of humanity and merchandise on the planet. Rows a half mile long of rugs extended several columns deep, with each carpet hand made by Afghans, Turkmen, Uzbeks and Tajiks. The carpets looked like an off red oasis amid the desert, and even odder were the old ladies with long, white braids and gold teeth, who eagerly sketched numbers in any currency you demanded, all while telling the history of each piece.

We walked for several hours around the maze of booths, from canning equipment and seeds to dresses and lace and carburetors, there was little we did not see in the bazaar, yet so much that is unexplainable, like an entire row of women, a half mile long, selling exactly the same fabric collar at exactly the same price.

Back outside the bazaar several hours later we searched the dunes for our jeep and found it along a dune that had been cut open by a small marmot. We spotted the odd creature running across the dune behind the jeep- it had the legs of a racing dog, the head of a cat and the belly of a rabbit. We ran after it, despite the 100 degree weather, and chased it into a hole that had visibly dangerous claw markings along the interior, but it was gone. We drove the jeep up and down the dunes several times on the excuse that the suspension needed to be tested. In reality that kind of off roading is exhilarating—and the suspension, we now know, is fine.

3 thoughts on “The Push-Push Bazaar”