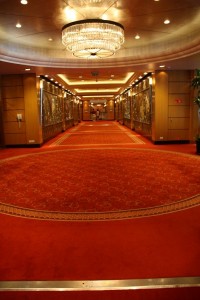 Nothing can compare with the Cunard line when it comes to luxury cruising. We found this out in vivid detail over the course of a seven day, transatlantic cruise from New York to Southampton, UK. The cruise departed on the 6th of July. The first night was an elegant casual affair with beautiful cuisine in an even more luxurious dining hall. Since we had booked so last minute we received no prior cruise package outlining what to expect, etc. We did not, therefore, book a seating. When we arrived at the late sating for dinner there were limited seats available, so he put us at a beautiful, 6-person table by the window in the corner. Arguably, this was the single best table in the room because we had a beautiful view of the ocean not a foot from our chairs, and the corner was quiet enough to hear our other table guests. Meanwhile, it was a preferred location for waiters so we ended up with one of the best servers on board! But the real jackpot came with the company!

We met, at our table, the most amazing, adventurous and memorable couple you’d ever hope to come across. Born in India during colonialism, the lady had deep insight into the region, and considered it home. Her love of Indian culture and cuisine ran deep, and she regaled us with stories that were so enthralling it was literally the best entertainment on board. Her husband was a Brit from Rhodesia, and together they lived wonderfully in that country experiencing so many marvelous things that the stories seemed to weave together in a cloud of awe. Mike and I sat enraptured in the life experiences of this couple night after night, and looked forward to dinner time throughout the day. By the end of the cruise we felt we knew them very well, in the way one comes to know a character in a good book. We asked them if they would be writing a book about their amazing adventures, and they seemed to favor the idea. As humble as they were, though, it’s hard to tell if they will do it or not. If they did, it would be an instant hit. Aside from their many adventures in Africa, they also lived in Europe, the UK, Ireland and America, and traveled around Asia to boot. When it comes to lotteries, Mike and I really hit the jackpot with this couple at our table. 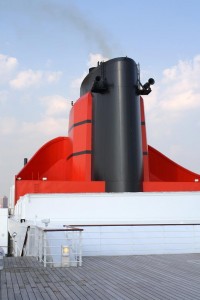 The other entertainment on board came in the form of the Royal Cunard dancers, who were absolutely amazing, and the Royal Cunard Singers, who had someone in their midst who had the aggravating problem of being entirely off key 90% of the time. There were piano players, a harp player, a comic singer, a violinist, trivia crew, game staff and much more. One big band on board played for the gala balls and there was such talent on the dance floor that the 80 year old women could give Dancing with the Stars a run for their money.

One of the most amazing things happened while on board as well. Mike and I are traveling to Europe to embark on the Mongol Rally, as many of you know. So, we had with us our backpacks filled with outdoor clothing. We did not have a tuxedo. Mike and I found out the first evening on board that you would not be permitted into the dining hall, or really anywhere on board after 6pm, if you did not meet the nightly dress code. This was a bit shocking. I had packed an evening gown for the cruise that was wrinkle-free and fit in a sandwich bag when rolled up. Mike had nothing. He ran down to the pursers office (a lovely group of folks) who directed him to tux rentals at Hermes, the luxury designer clothing shop. A tux rental was something we didn’t really budget for, but Mike talked with the sales clerk who listened patiently about the rally, Mercy Corps, the adventure, and why we were on the QM2. She nodded politely and at the end she handed him a suit on the condition he dry clean it before the last day. We were astounded! She was such a lovely lady and did us such a huge favor. Without her, we might have missed every dinner on board because it turned out every single night until the last was formal. While all this was going on I was at the on-board movie theatre watching Invictus. Suddenly, Mike came into the theatre in a tuxedo and a million-dollar smile. I was amazed! I jumped up and we ran to the room where I quickly got ready and we dashed to the champagne captain’s gala and then a lovely dinner with our adventurous couple. It was an amazing evening, a truly epic and memorable day made possible by a very friendly lady.

We met several very interesting people on board, including a US Navy veteran of WWII who showed us his original military ID card. We met a man who was in charge of the horse racing commission in the UK, and a man who headed up the UK football league. There were very few people our age (read- none) and yet we had the best time talking with interesting folks who had already experienced a great deal. Two thumbs up for Cunard, and two more for attracting such interesting folks to their cruises.