The Return to the Amber Waves of Grain 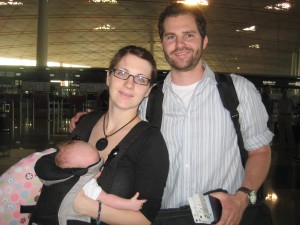 The time has come, my lovely friends, to bid adieu to the Middle Kingdom. We packed up our belongings– things we had acquired over two years in Beijing– and shipped them home in suitcases with friends over the course of a few weeks. When the 8th finally rolled around, we had a giant pile of suitcases to take with us, and of course tiny Gwendolyn and all of her belongings.

One side note. Our little baby was five weeks old when we boarded the plane from Beijing to Tokyo to Chicago. Yet she now has more clothing and accessories than both Mike and I combined. She has a car (stroller) a lazy-boy (car seat) and a contraption to strap her to our chests like royalty on parade. She also has a giant suitcase of clothing that spans from formal dresses and shoes to nightgowns and day clothes that would make Kate Middleton jealous. And that’s not even counting all of her diapers, wipes, lotions, soaps, medicines and more. So, of the five suitcases we flew out with, two were her things.

Our first flight to Tokyo was on JAL – Japanese Airlines. As someone who hates flying and hasn’t done it in over five years, I have to say that the folks at JAL were amazing. They took what could have been a horrible experience for me and turned it into a bit of a wonder. The ladies were so nice, beautiful and concerned with the baby’s comfort that it was almost over-the-top care. We went through the diplomatic line at security as JAL folks led us and the baby to the shortest line. We then went through security (baby got her first pat down) and then got priority boarding at the gate. Once on board they brought a snack for the baby (she was too young for bananas and crackers) and brought her toys (too young, but they left her a JAL burping bib) and then after takeoff they showed up immediately before giving drinks to anyone to set up the clip-on bassinet. Then they came by periodically to make sure she was comfortable and gave us a bag of diapers and wipes for her and allowed us to use the first class bathroom to change her. They were amazing. The flight was only slightly over three hours, and they filled that time up with doting on Gwen.

Then we had a five hour layover in Japan where we were shocked to discover a Mother’s Room with an area for breastfeeding, padding changing tables, and a tap that shot out purified, boiling water for cleaning bottles. Next door was a play area. We were so shocked at the care given to mothers, babies and kids in Japan, especially because in China people were still elbowing their way past me holding the baby at the airport, and smoking near her. Tsk tsk.

From Japan we boarded an American Airlines plane where the flight attendant never even acknowledged us. We had reserved a bassinet, but once in the air they said they couldn’t find it. They never brought us anything for the baby, and when Mike went to change her in the business class bathroom they kicked him out (the coach bathroom is smaller, smaller changing area impossible to use and a giant line to wait in while holding a fidgeting baby on turbulent winds). This flight was eleven hours long, which means that without the basket to rest her in we were stuck holding our newborn on our laps. That meant we couldn’t even fall asleep for a moment or she could fall. 11 hours of no sleep right over the nighttime was tough, really tough. And since we were landing in Chicago and renting a car we were worried we’d be too tired to drive. American Airlines was really, really bad. We were so dehydrated from lack of anything to drink in addition to sleep deprived and exhausted from holding up our eleven pound baby for eleven hours that we were near zombies when we landed. And by the way, there is no priority treatment for people with babies once you land in the USA. No Mother’s Room or anything. It’s hard to see such a stark contrast. (By the way, type in “American Airlines Sucks” on google to see more photo evidence).

We rented a car from Budget and the guy there upgraded our ride once Mike told him we had a newborn. That was a nice surprised. We had a Jeep Grand Cherokee and it barely held all of our luggage and piles of baby stuff.

So, we’re back in America and landed safely after 24 hours door-to-door with a newborn. She was a champ and didn’t cry once. And we’re so grateful to the amazing service on JAL for making the first part of our return so wonderful.

3 thoughts on “The Return to the Amber Waves of Grain”