A few days ago our kitchen sink began to leak and we had quite the adventure as the landlord’s mother and several other randoms arrived to ‘fix’ the problem. So, when the back of the toilet at our Chinese rental apartment began to run we bean to panic. Obviously the float was broken. I poked around inside the back trying to remember what my grandfather had taught me about plumbing. The pieces are completely different here and the floating thing that stops the water is a non-existent part of the Chinese design.

I called the landlord and asked him to have a plumber come over, but not to send the whole crew of voyeurs this time. Naturally he responded that the whole army of curious bystanders would arrive between 8 and 9 the following morning.

At 7am I sat bolt upright in bed. Last time they came over the plumber flooded the floor near an outlet and nearly killed three people via electrocution. All night I had horrible dreams about people frying. I went into the bathroom, unplugged everything and went back to bed.

At 8:30 there was a knock at the door and two strangers and the landlord filed past me and into the kitchen. I redirected them to the bathroom and the three of them starred at the back of the toilet. Chinese usually use squat pots, so the site of the upright was a bit confusing for the plumber. I could empathize. 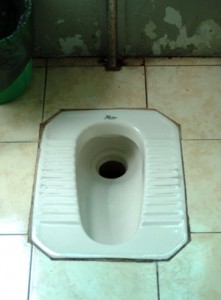 Half an hour later the three emerged, turned off the water to the apartment and left to buy a new part. I went into the bathroom. They had flooded the entire floor and mopped it up with a towel into the tub. At least I knew what to expect this time! Apparently flooding is part of the process.

I left the apartment after talking with the landlord who explained they would be back at 3pm. In a building with no water 6 hours is a long time. I went to breakfast with a friend, ran some errands and returned at 2pm to find the problem fixed. Part two was much better than the nearly lethal part one!