The Surprise Recovery of the ATC Saxo

We pulled out of Khovd behind schedule and a bit fearful of our Citroen Saxo’s ability to make it all the way to UlaanBataar. The gear linkage continued to pop out roughly every 50k. We would all jump out, jack up the car, and Bill would do his magic under the machine while Mike and I repacked the car and got ready to toss the jack in the trunk. We could fix the issue and be mobile again within five minutes. Despite this, the fear was ever-present that one of these times it would not be as simple a fix as a duct-tape band around the linkage. We held a short team meeting and decided to forge ahead. We were now convoying with two other cars. A Suzuki Swift with an Aussie and a Irish guy, and a Fiet Diablo with a Norwegian duo in it carrying a hitch-hiking Irish and a waylaid Canadian. Together, we set off towards the next check point, with everyone involved fully aware that our little Citroen Saxo might not make it. 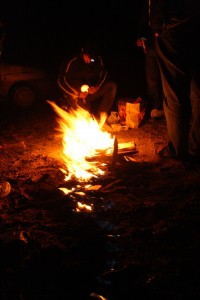 That first day we made it roughly 100 miles, traveling for roughly seven hours. We didn’t stop until well into the night. At one point the road disappeared and our three cars could be seen from a distance, I’m sure, bobbing around on the Steppe going nowhere in particular. Since we couldn’t see the road, we decided to stop. The Norwegians took off to scout out the road, telling the other cars not to turn off their lights. Naturally, once they were out of range we hit the lights and watched them drive around in circles across the Steppe for a few moments before taking pity on them. We set up a campfire, set up our tents and cooked a massive joint meal of ramen and Norwegian military ration packs. That night it rained, and it became apparent to Mike and I that our trusty tent was no longer water proof. Rivers of water ran down the interior of the tent and the bottom, far from being water proof, was now a swimming pool holding our sleeping bags. We jumped out as soon as the rain let down and slept restlessly in the car.

If we thought things would get easier from this point on we were sorely mistaken. In the morning, we packed up our soaking wet belongings and hit the non-existant road. We eventually found the path we needed through the hills and saw a road up ahead in the distance. As with all things in Mongolia, our roof rack began to wear and tear and less then an hour after departing it slid off the roof. We spent an hour jerry-rigging the rack, ripping apart the useless bits and duct-taping the entire newly constructed frame to the car. Thanks to the Norwegians, we had a few extra zip ties to secure it. We set off, leaving a pile of broken roof rack bits in the grass. About ten minutes later, the gear linkage popped again. 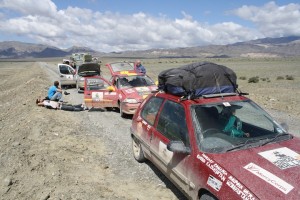 Despite all the problems with our car, what happened next was the biggest surprise of the day. I was riding in the front seat of the Fiat Diablo with Aslan, the Norwegian warrior. He was in the midsts of telling me that the only thing that could disable his beast of a car was a computer error. We jumped up on the road that we had all seen in the distance and within five meters of riding on smooth asphalt the Fiet went dead. Aslan was as calm as when the Vikings invaded the New World, and jumped out of the car to assess the damage. Five hours later, there was nothing to be done. The engine was jerry-rigged in much the same fashion as our roof rack, with wires and plugs duct tapped around pipes and hoses. It looked like modern art, and it worked…. for a while. Eventually the Fiat needed a tow, and a friendly Red Cross volunteer showed up with a Jeep just in time to town the Fiat to the top of the hill where a small collection of gers stood around a tiny shop. There was literally nothing else in sight for miles. The Red Cross worker spoke some English and explained that she could secure a tow truck tot take the Fiat to Ulaan Bataar, meanwhile the Norwegians donated their tool kit to the Jeep driver for the tow. It slowly became obvious to us that the tow truck could not materialize for days and the cost was skyrocketing the more people got involved. It wasn’t looking good for the trusty Fiat. Just when we were all discussing how to move forward without abandoning any of our convy, the Canadian walked over the hill with a bearded Aussie in tow to save the day.

One thought on “The Surprise Recovery of the ATC Saxo”