Mongolia: Where The Wild (Mustangs) Are 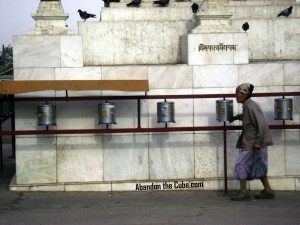 Tipsy and aboard a very stubborn and slow horse, I became angry at the brute for not obeying my drunken commands to go faster. Mike laughed at me and my silly little horse while he strode confidently atop a giant beautiful stallion. We carried on in this manner for about an hour before the beautiful scenery sobered us up and we sat in awe of the majestic mountains and streams that surrounded us. Taking it slowly to absorb the view, we headed deep into the rugged valley, the horses stepping over corpses of horses along the way.

We passed several other yurt camps, some with as many as twenty small felt yurts in a circle around an open fire, some as small as a single yurt and a lean-to shed for the goats. We trekked up several rather large hills before finally spotting our turn around point—the largest hill in the distance, its top covered in fog and invisible.

Mike took the hill at a jog, my stubborn ass-like horse ambled up slowly behind and I arrived atop the hill a full ten minutes behind Mike. When I got off my inbred horse, I tied the brute to a tree and looked around for Mike. In the distance I saw something out of the ordinary and walked in that direction. Mike was lying on his belly looking over the edge of the hill. Upon hearing me approach he rolled over and pulled me on top of him, all smiles. “Would you look at that!” he quipped, pointing down the opposite hillside. A large herd of wild horses were grazing slowly up the valley, herding their young fawns in the middle. Mike’s tears were moist, though he tried to hide that fact from me, and I was amazed that such wild things still existed.

After stalling on the hillside long enough, we set off back towards camp at a slow jog. Mike switched horses with me after a bit and I took off at a full sprint atop the beautiful stallion, I turned him quickly, had him chase goats, ran him towards yurt camps and then away, raced up hillsides and generally had the wind blowing back every strand of my hair. I made a wide circle and raced back towards Mike, who was sitting grumpy atop my stupid half-donkey horse. He cheered up as I approached; apparently I had a splattered bug on my forehead. I didn’t care. I steered the giant horse and ran in circles around Mike. After a while the horse and I tired of the charade and Mike tired of the ass. We switched again and I felt trapped atop the slow pack animal. Finally we reached the camp, exhausted and sore in the hind regions from bouncing in the saddle. Neither of us knew how to ride properly, and we had bounced around for the past two days pulverizing our rear ends.

When we reached the camp we had to pack. Today was our last day in the national park. It was a sad packing session, and we hurriedly threw everything into bags so we could spend the last few moments saying goodbye to the dogs and horses before heading to town to find Billig and Wife. We set off across the field and saw the couple flirting in the distance as they headed in our direction. They were tickling each other and laughing as they approached, unashamed to be so affectionate in front of us. Billig asked Mike to step into the white car with him, it was 100 or so yards back in the field. Mike and Billig set off while I waited on a bench in town. Wife had gone back after a cheery goodbye, to make more yogurt because her mother was visiting the camp that afternoon.

Mike and Billig sat in the back of the car while the cowboy and the Japanese man sat up front. I was extremely worried that something scary was happening inside the car, and I was terrified for Mike. After about ten minutes Billig jumped out, yelled something into the car and jogged away. Mike came over and sat on the bench with me. The cowboy sat guarding us while the Japanese man idled in the driver sat of the car. Mike was contemplative and looked tired. I asked what had happened, but just then Billig appeared holding three beers. He smiled and downed a beer, sharing it generously with an elderly man sitting on the bench near us. We all drank our beers, exchanged addresses and the Billig set off across the field waving goodbye. Mike explained that he had paid a bit more than he was comfortable with for the use of the horses to the cowboy, but that Billig was reasonable and fair, and the whole trip had cost a fraction of what we had budgeted.

We boarded a bus and prayed it would hold together. It jumped and creaked the whole way back to Ulan Bator, where we said goodbye to the driver and jumped on a plane back to Shanghai. It was another tumultuous flight that left me gasping into a barf-bag and ecstatic when we finally landed back on the ground—where humans are meant to be.