Top 5 things You Would Miss the Most About America

For people who have never left their home, or the area where they grew up, this post will be a bit shocking. It’s about missing things that were taken for granted when they were too obvious to observe. After living in China for seven months, I was surprised at what I missed most about America.

I missed the food. American food is truly the most versatile, and perhaps for that reason we are the second most overweight country in the world (the first being the Philippines). I miss the availability of Mexican food, Italian cuisine, German brats, French cafes, Indian buffets, Chinese delivery, hamburgers, Mac & cheese and especially walking down the isle of the grocery store and realizing that every isle is the ‘imported foods’ isle, as America is composed of so many ethnicities that we benefit in that we see more of the world’s cultures in our grocery stores than most people in the world see in a lifetime.

I missed the people. American people are an independent and stand-offish lot to a newcomer. But to a veteran of the country, they are seen as stubborn because they are proud, closed-minded because they are determined, and most importantly– they are forward looking. Perhaps because American history extends back only a few hundred years, we have not had to live through massive defeats that left the nation in shambles. We are an optimistic, fun-loving, humorous and above all, an analytic people. 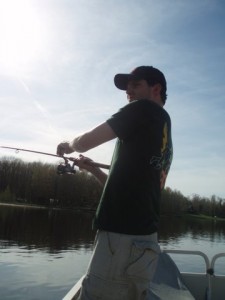 I missed green. In China and Central Asia there are massive open spaces– but they are called deserts. In America we have massive fields of grass or growing grains. We have national parks, mountains, streams, and openness in the geography that makes us feel small and yet empowered. A thunderstorm in Illinois is somehow more beautiful than anything in the Louvre.

I missed the air. We take our lack of air pollution for granted. The rest of the world suffers from pollutions that cripple their lungs and darken the skies. Smoking is not seen as a health hazard in China, for example, because at least smokers have filters for the local air. Living in China, seeing the sky was a luxury. Living in America, I could stare at the blueness of the sky for hours without being bored. Clouds have so many shapes!

I missed the culture. Americans are friendly, perhaps owing to Christianity and a fear of Hell if one does not try, with every moment, to attain the rights to heaven. Nevertheless, in American people open doors, pull out chairs, say hello or nod to acknowledge your presence, give seats to the elderly, and have ramps for the disabled and offer vegetarian selections on their menus. Though not a veggie lover myself, all of these small kindnesses add up to a place wonderfully easy to live in. These things we call manners are really cultural quirks, and do not exist everywhere.

Well, when I lived abroad those were the things I missed, and when I returned to America they were the things that made me smile on a daily basis. Wherever you call home, find something simple and taken for granted to smile about today.

America Expat in China
Previous PostMoving to Shanghai: ATC Relocates to the Middle Kingdom Next PostExploring Xian Amidst the Dangers of Dysentery