Pudong district, in Shanghai, is viewed as the financial hub of mainland China. Fully suited businessmen scurry beneath steel high rises from coffee shop to news stand to marble offices with crystal views of the Huangpu River.

Amid this jumble of activity a startlingly Freudian phenomenon is occurring. Eleven years ago the Jinmao Tower was erected. It was hailed as the tallest building in China, unique in that its 88 floor design was seen as distinctly Chinese. The building held prestige in the mainland for over ten years with over 5000 visitors a day. This year, however, a bigger building has emerged. 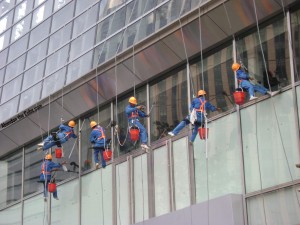 The Shanghai World Financial Center was erected directly across the street from the Jinmao Tower, and surpasses Jinmao’s 88 floors by extending the panoramic viewing center to the 100th floor. Instead of charging 100, which Jinmao charges, the SWFC charges 150. At a height of 1,555 feet, the viewing hall is the highest in the world, and offers a nearly unbroken view of all of Pudong which includes a view of the tip of Jinmao Tower.

I wonder, however, at the childishness of erecting ever-taller buildings in the middle of a global market recession. Roomers in the financial hub suggest that the SWFC is having trouble stocking their office space. Small wonder when they demanded only full-floor tenants at outrageous prices. At least four new office buildings have opened in Pudong this year, and companies are growing wiser and buying space while property prices are low in other towers. Now, this 100 floor monstrosity sits nearly empty. At least they have a great view!

Despite the apparent ill logic, some companies have taken up residence in the SWFC. This is the Freudian phenomenon I mentioned earlier. Companies are showing their power and might by lodging themselves in the tallest phallus in China. Despite being overpriced and a massive tourist trap (meaning, the food court will be impossible over lunch breaks) a select few companies have decided that prestige can be gained by being on the 30th floor of a 100 floor building. I’ll never understand it. On which note, my company operates from one of these two towers (not telling!) and I look out my office window every day at a stream of tour buses and wonder if sitting in a giant Chinese phallus is really helping the company’s image.