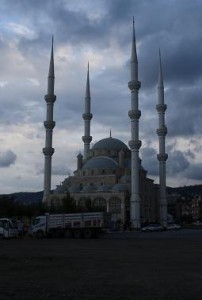 After a restful week in Yusufeli we felt more than up to the task of our 6 hour bus ride to Trabzon. This was no ordinary road, but a winding, rocky pathway on which giant buses passed each other going opposite directions like slugs creeping past one another. I quickly fell into my “sleep when you can!” routine and managed to feel marginally normal for the first twenty minutes. But when we hit the first of a series of winding curves it was back to barfing into a Doritos bag for me! Looked up at one point, mid-puke, and Mike was laughing hysterically as I gave the thumbs up and finished emptying my stomach. Apparently I had eaten something red (I don’t remember that?!).

We arrived relatively unscathed in Trabzon, which is one of the biggest Black Sea coastal cities in Turkey. We had decided not to take a direct bus to Ankara, but to tour the Black Sea Coast and soak in our last glimpses of this temperamental sea. Trabzon was a delightful city with glistening white Christmas lights hanging over pedestrian streets that were crowded with merry people shoving baklava into their mouths by the fistful. We checked into a hotel and received a discount based on how utterly hopeless we looked with our giant bags and sweat-covered faces. We wandered into the central park and had tea before finding a place to dine and exploring the city on foot. Mike’s primary interest was in acquiring a few beers, since Ramadan was now over. This proved more difficult than one would imagine, and Mike became ever more determined as the shops displayed endless amounts of sweets but no beer for poor Mike.
We strolled around feeling like it was a Christmas-like city, without snow and full of Muslims. The attitude was jovial and holiday-like, and everyone seemed happier than normal and full of holiday cheer. It was the last day of post-Ramadan feasting, which was perhaps part of the mood, but I think Trabzon is also just a friendly place. 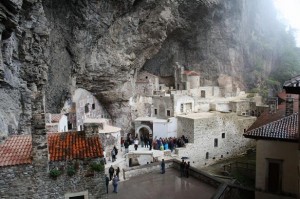 Sumela Monastery. The next morning we booked a trip with a travel company (our first group tour!) to go to the Sumela hanging Monastery, about 45minutes away. Our minibus held mostly Turkish tourists and three other international travelers. It rained, and our minibus sent showers of water up the windshield with every puddle we hit. We were deposited at the top of the mountain to climb the last 1/4th of the mountain on foot. As usual, Mike forgot his umbrella so we huddled under mine as we climbed through the woods and up ancient stone steps to the monastery. The buildings have been restored, but were original built in Byzantine times by the Greeks who had hoped to acquire the area as a Greek state. The creation of the Turkish Republic saw the demise of Greek Orthodoxy and the abandonment of the monastery. The structure itself clings almost desperately to the side of a sheer rock face high above an evergreen forest, with a raging river and waterfalls galore below. We wandered from room to abandoned room and gaped at the paintings of Christ and the Virgin Mary on cave walls.

After an hour at the Monastery we wandered down the mountain in the rain as cars splashed past us on their way up. Midway down my shoes had more water inside than out, and my toes began to turn to raisins inside my mushy socks. A friendly Turkish family picked us up, thanks to our pathetic looks once again, and drove us down the road (which was now more a river than a road) to the base of the mountain where a small restaurant sat nestled in the woods. Here our driver had instructed us to gather at the appointed time. We ate a small meal so that we could sit inside where it was warm, and then boarded our minibus back to Trabzon where I sat with a German lady, an Australian man and a Polish traveler as we discussed what was worth seeing in Turkey and the highlights of the Caucus—the normal backpacker conversations one hears in every bus station, airport and hostel across the planet.

One thought on “Trabzon and Sumela Monastery”