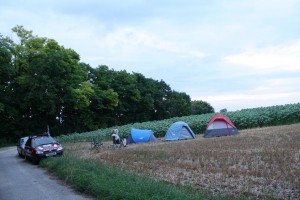 With our small caravan, we made progress slowly. Having stopped for food, for water and for gas and bathroom breaks (all at separate times for some reason) we eventually lost one of the cars in our convoy, the Back flips and Summersaults team, which had farther to go that evening and wanted to make haste. That left our team and the Face Race team, which sped things up a bit. We reached Austria as it was growing dark and decided to pull over and camp.

We were on a major highway with sunflower fields on either side as far as the eye could see. A dirt road up ahead was all we needed, and at the first sign of one we jumped off the road and drove several kilometers away, weaving around fields as we went. Eventually we settled on a place that was on a hill, but relatively lower than the high ground around us. We set up our tents and pulled the cars into the field. The Face Race team, being British, pulled out a soccer ball and set about in a small game which we eagerly joined in on. We cooked dinner and hung out into the evening. The day before in Prague another team had given me a strange toy. It was a piano with a drum set mounted on it and a techno beat player. We set that up and took turns playing DJ on the strange device. It took up so much room in the car, but it was too funny not to keep. 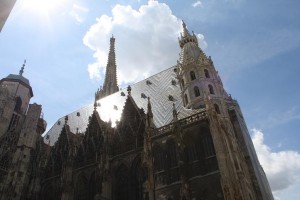 In the morning, we packed up and had a light breakfast before hitting the highway towards Vienna. We easily found the center of town and paid for parking. Walking off into the labyrinth that is Vienna, we quickly stumbled into the center square with the cathedral. It had been a while since our last Breakfast Beer, so we ordered up a round and sat outside the church watching horse-drawn carriages pull tourists around the city as they snapped pictures and consulted their guide books. We enjoyed the respite and although the waitress eyed our dusty group with a wary eye we all paid and walked off to find food.

The hunt for food turned out to be epic. Finally, King Rikki (so called because of his love for fine things) found us an affordable place to have schnitzel and fries. I hadn’t had that since my youth, so it was a nice treat. We walked around 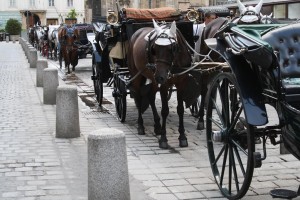 town a bit more before heading back to our cars. A wave of relief hit us as we turned the corner to find our cars still there, everything on the roof rack still in place. Another day without any major problems! Perfect. The two Olis and Rikki boarded their car and we did likewise, pointing it east to Bratislava.

One thought on “Vienna, Austria”