Where are those guys? 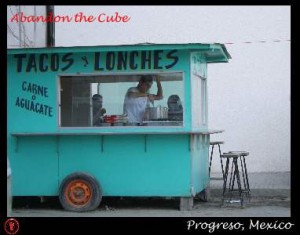 I suppose reading the blog might have been confusing recently for some of our more attentive readers. We posted blogs from Canada and Chicago nearly simultaneously, one praising the Olympic ski runs at Whistler, the other lauding a drive from North Carolina to Chicago. Meanwhile, posts from Mexico and Texas are also popping up. If you’ve been confused, you’re probably not the only one. Here’s what has happened since ATC returned to America:

We arrived in Ft. Lauderdale, Florida- a beautiful and warm place complete with scenic palm trees and overpriced taxi rides – in early November, 2009. From Florida, we traveled by Amtrak to Columbia, South Carolina where our train arrived at the ungodly hour of 4:00am. We walked through the last of the hurricane season in Columbia while finding a hotel, and in the morning we booked it north….to North Carolina. We spent several days in the Carolinas visiting relatives and reacquainting ourselves with Krispy Kreame doughnuts and Starbucks coffee—two things sorely lacking in Serbia. No joke, the Serbians could use a few tasty treats to cheer them up a bit.

After our family time in NC, we rented a car and drove to Rockford, IL for some more family time before ATC was split as Lauren went to Minnesota and then Washington (and Canada) while Mike went to New Hampshire. Thus, the blog has postings from the slopes of Whistler, BC and the hills of New Hampshire almost simultaneously.

With the holidays safely behind us, Lauren and Mike have reunited and even managed to drive from Illinois down to Texas, where they were lucky enough to meet up with some Old China Hands (friends from Shanghai) who currently reside in Austin. Continuing on, they traveled south to find warmer weather and calmer skies on the gulf coast of Texas, where they launch mini-trips into Mexico weekly.

So, here I write from a windy but beautiful beach on South Padre Island, TX as the gulf waves crash before me and the salty sand and wind blow my hair into my eyes. The gin and tonics flow freely here, and while little on South Padre Island remains open past 4pm (this being a retirement community) I’m happy to report that this writer has finally found a quiet place to write, reflect and detangle.