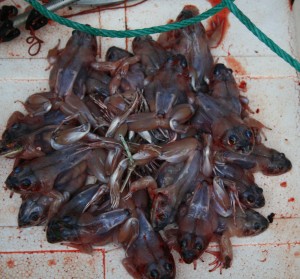 We arrived in Chongqing at 19:49, twenty minutes off schedule. I was handsomely impressed with their time management skills. On a 31 hour journey the train managed to cross the majority of the nation and arrive nearly on schedule. On train trips in the US I planned to arrive over four hours late, per leg. When we stepped of the train we were greeted by a throng of locals screaming “hotel” in Chinese. We bypassed them, knowing they are regular scam artists, and stepped into a small shopping booth where a young woman charged us an unheard of 7RMB for a two minute phone call (normal price: 50 mao (12 cents). We stood in line for a cab for nearly ten minutes before noticing the line stretched around the block, and cabs were arriving only rarely for the line of over 100 tired passengers. We went around the train station and found exactly what we were looking for. Illegal cab drivers who charge double the fare to take you half the distance. After negotiating for over half an hour we agreed on a 40Rmb fare. 25 for the driver, and 15 for the bridge toll. Needless to say there was no bridge toll and the greedy driver pocketed the money with a smile as he said “all foreigners have money. no problem.”

A bit irate, we walked around the river where the crook had dropped us of. Our hostel was nowhere in sight. After another overpriced phone call we spotted our contact, John, a Chongqing local who runs a friendly home hostel. He took us up to his three bedroom apartment (converted into a hostel) and showed us our tiny room. The spartan and deserted, it was a decent place to stay. We left after dropping off our bags and washing our faces, and found a local stall to eat dinner. The outdoor dinning consisted of plastic pink chairs and a piece of plywood over a bucket for a table. A worker in the ‘cafe’ plucked a large fish out of a tank in the front of the store, and lifted it high above her head. Smiling shyly at me, she slammed the poor fish against the cement, splattering foul water, blood and scales across our table. I shrieked in horror as she laughed and picked it up and again smashed the squirming beast into the cement. She did this several times as I staggered away from the stall and Mike paid our waiter (a drunk man with one leg of his pants missing). The fish-torturer began scaling the fish, which began to flop hideously about in the sink. She lifted it and smashed it against the ground one last time, now covered in petrol, dirt and dog shit. She smiled, finished scaling the poor swimmer, and then began to heat a pan. A cop and his ugly girlfriend watched the whole scene, applauding how fresh the fish at this stall was.

In the morning John promised to help us book tickets on a cruise ship up the Yangzi for 580Rmb. We were thrilled, having investigated and found the average booking agent was charging over 1000Rmb. We fell asleep optimistic, but awoke to the thunderous sounds of horn honking at 5:00am, to which mike mumbled through tired eyes, “did you know honking is illegal in Chongqing” (and indeed, it was outlawed in 1997. Obviously no longer enforced). We stumbled out of the room, dizzy from the overkill John had done on month balls in our tiny room, and hungover from breathing poor air for the whole night listening to illegal honking. Sitting on the living room couch, John made a proposition to Mike. He proposed they go into business together ripping of western tourists. The key was that foreigners had money and did not mind spending it. John and Mike could split the profit they earned by overcharging unknowing tourists. Sick at the thought of ripping of friends and fellow travelers, we politely declines. John then began talking about how much money he was making in Tibet on foreigners who would agree to pay any ridiculous price he demanded to see China’s Tibet. At this point we were sure ready to flee the hostel, and Chongqing for that matter for all the unpleasant people we had so far encountered. On the excuse of hunger we left John sitting on the couch talking about his pyramid scheme. Walking around a local street market, we gnawed on lamb skewers and dined in a local street stall with a cold beer before strolling arm in arm down the stepped alleys. 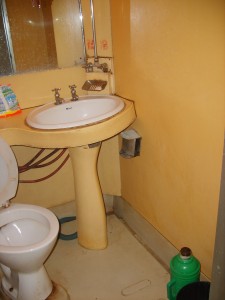 We were set to meet John at 17:00. He was massively late and the cruise, we were told, would leave at 18:00. Finally he burst nonchalantly through the door, took our money and told us to follow a random woman to the cruise. We followed her after several rounds of negotiations and swears, and she led us to a dock several hundred yards away from the primary port. The main port held beautiful white ships with lavish decks and gold dining halls. We were led to an underground passage to a hidden terminal. Trying to cheer ourselves, we opened a few beers and snacks and watched a movie on Mike’s laptop in the waiting room (after being informed our boat left at 21:00). A friendly man riding his bike across China joined us. He spoke little English, so we talked in Chinese about his trip, and got to know him as best we could with limited language skills. He shared a few beers and before we knew it we were smiling and boarding the gangplank to the boat.

The ‘cruise ship’ was probably condemned, it leered to one side and stunk of diesel and fish. Fake plastic grass covered parts of the deck, and the exhaust pipe for the engine (itself a relic from earlier times) sprouted black smoke and coughed up flakes of engine onto the passengers on top deck. Our shoulders slumped as we were ushered to our room by a rude and almost unbearable man. Angered and nearly in tears, I collapsed against the door of our room, waiting for the floor attendant to unlock our door (no passengers were allowed to keep keys and had to track her down each time to enter the room). When the door was finally opened, we saw two bunk beds, a soiled chair and a tiny yellow stained bathroom. The bathroom deserves more description: It was a plastic square with a drain, a toilet and a sink. A large shower head was fixed to the ceiling. If one showered, the water would fill the room (nearly a quarter of a foot)before slowly draining. The water was a strange brownish gold color. We put our bags down and slowly sank to the beds as we talked about our options. We could chase John down and demand our money back, or we could make the best of it. We decided on the later.

After deciding not to jump overboard we went on to the top deck where a young attendant demanded 60Rmb to sit on the deck. Another fee, and no surprise. We felt we existed in China only to provide money to everyone we met. We sat under the billowing diesel exhaust coughing and silently watching other passengers look around in dismay. We were the only ‘foreigners’ on board. Once the whistle blew we snuggled into the corner breathing through our clothes. After some time, and I do not remember how or why, we both started laughing. Out of the black cloud of smoke emerged to pale faces that belonged to a Swiss couple on a whirl wind tour of the world. We talked well into the night. When we returned to our rooms, full of laughter and smiles, we had black streaks coming out of our noses. Our ‘roommates’ were in the room when we got back (four bunk beds). The wife was a pretty and thin woman, she was wearing nothing but neon red lingerie with matching nail polish. She had her purse on her arm (neon pink) when we walked in for some reason. Her husband was in a black button down dress shirt and nothing else. He sat on the bottom bunk eating oranges and staring at Mike. We fell asleep in silence, me on the top bunk reaching down, and Mike on the bottom bunk reaching up holding my hand.