Yarkand and the Southern Silk Road 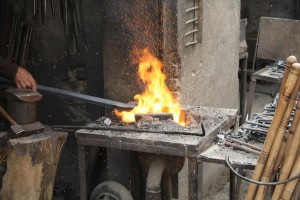 Although our time was limited, I did not want to leave out our day trip from Kashgar to Yarkand. Albeit a late entry, Yarkand was a significant city and part of the southern silk road pass around the Taklimakan desert. We purchased tickets at the long distance bus station in Kashgar for the 3 1/2 hour ride to Yarkand on the outskirts of the Taklimakan Desert. This bus drove around Kashgar for over an hour looking for people for the one-way trip through the scorching desert basin between Kashgar and Yarkand. Rumbling along while listening to Chinese and Uyghur songs on repeat, we were surprised to see that the railroad was being extended from Kashgar to Yarkand. Migrant workers were digging up the desert in preparation for laying the rails.

I checked Marco Polo’s description of Yarkand and it was, like several other entries…brief. The most memorable statement he noted about Yarkand was that he was surprised by the large population suffering from goiter (a swelling of the Thyroid caused by a lack of iodine in the diet). I did not notice any issues several hundred years later as surprisingly, Yarkand looks similar to other modernized Chinese cities. As we pulled into the bus station, I was hoping to see rolling sand dunes and bazaars, but was disappointed as I saw paved roads and cars. Instead, Yarkhand was a moderately well-developed Chinese city. More than half of the population was Han Chinese and there was a large PLA (People’s Liberation Army) base in the North central part of town.

Yarkand can easily be seen in about one day. The gem of the city is the central mosque, which is located right next to the Old Town. There was more starring going on here than other places we had been recently and it was not surprising that these people didn’t see too many foreigners coming through. After seeing the parts of Old Town in Kashgar destroyed, it was refreshing to see that it will live on in Yarkand. Around the corner from the Mosque, there was a thriving Old Town bazaar. One can see rows of blacksmiths fashioning metal tools, furniture, birdhouses, and a variety of goods; most of this done in a way similar to several hundred years ago. Not much has changed since in this part of town.

Our return bus ride somehow took 5 hours, making it a pretty long day trip, but I would highly recommend going to Yarkand – especially if you appreciate the bazaar and the Old Town of Kashgar. Maybe one day we will return and cross the entire southern route of the Silk Road around the Taklamakan. Perhaps we may return through Kyrgyzstan or Tajikistan.