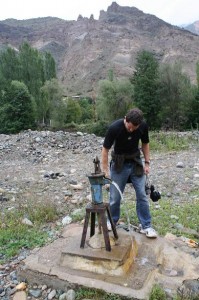 Having arrived in Yusufeli without a map, we had to rely on shabby LP written directions to get us a place to sleep. We have not had good luck with these in the past, but luckily since we were so exhausted after the 4 minibuses that day, we found the place within a half hour. We walked through the very quiet town of Yusufeli to Green Piece Pension. Reading our guide, we were tipped that there were places to camp here, which really appealed to us because we were somewhat shocked at the inflated prices in Turkey, or at least in comparison to everywhere we had been. We walked across a creaky suspension bridge that made Lauren’s stomach churn and down a gravel road for less than 1 k. Nestled next to a rolling stream, several vegetable fields, and rocky hill tops in every direction, this was a great place to stay.

The friendly family immediately showed us the camping area and within a few minutes, our camp was all set up. The nice thing about Green Piece, was that we could use their facilities, which included a restaurant, wifi, warm showers, and bathrooms. Over the next several days, as we really took a liking to the place, it rained 5-6 times a day. I was joking with Lauren that it was a lot like Seattle. Coincidently, we also heard a comedian’s joke about Seattle on my iPod, “You know what they say in Seattle, if you don’t like the weather, just wait 5 minutes and then shoot yourself in the face.” – Probably a little dark for the blog, but the rain was actually really refreshing and the rain lulled us to sleep in the tent at night. We also got a lot of work done on the site. It was funny making a few Skype calls from our tent – as the fact that we had wifi in a tent was ridiculous, but I made a point to tell everyone where we were. Traveling is not what it used to be, huh? 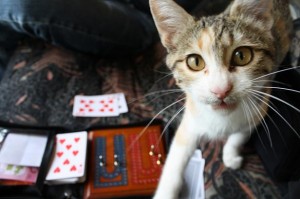 One thing that did not take us too long to pick up was that there was a shortage of food!!! Yusufeli was a very religious Muslim town. We realized this the first night when the 5:00 am call to prayer blared on for several minutes and woke us up in the middle of the night. We also quickly learned that it was the festival or “torture” of Ramadan. Ramadan, a Muslim “holiday,” is a long period of fasting. This made people irritable, hungry, short-tempered, and ill-humored. It was also difficult for us to find food as all the food establishments were closed. It also made me feel guilty to eat in front of the family when they couldn’t eat from sun up to sun down. The lesson learned was, and we had heard it before: Don’t go to Muslim countries during Ramadan. Unfortunately, I don’t really keep track of things like as they usually don’t apply to me. They did in Turkey. We were able to cook a few meals in the kitchen as well. They told us we could use the kitchen, but I am not sure how happy they were about it. We also saw several whitewater rafting groups come there while we were there, a man from Holland who had been riding around on a motorcycle for a year and a half, as well as another Dutch couple with a camper who lived in St. Martin. Besides the great company we had while we were there, the slow atmosphere of the mountain city as well as the trekking around the village, made it a worthwhile place to plan and time the rest of our trip up to Ankara.

One thought on “Yusufeli and rainy camping”