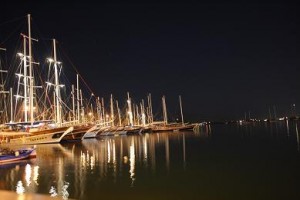 We arrived in Fethiye and were immediately hit by how relaxed the city seemed. Boats lined the coast, which was on a steep hill overlooking the water. A castle sat lazily on the top of the hill, and beautifully preserved stone crypts dotted the hillsides. There was a lovely ruined arena in the center of town, although a bit covered in spray paint.

We walked around the town, which was full of friendly folks trying to sell us anything from T-shirts to clothing to their stray cats. We found a cheap place owned by a guy who had spent years in St.Paul, Minnesota. Small world. We enjoyed the entire day in Fethiye and even pondered coming back to this city once we were done traveling as a possible place to live for a while.

Once settled into our hostel, we decided to book a short, day-long cruise around the coast. We hopped on a boat leaving at 10:30 the next morning and spent the entire day on the boat. Our first stop on the 12 Islands Cruise was to a small Island covered in goats, but otherwise uninhabited. We jumped off the front of the boat and into the clear, blue Mediterranean water. 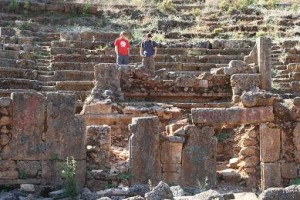 The entire cruise had cost 19 TL a person, which we thought was a phenomenal deal considering it included lunch. We stopped at a second scenic island where we all cooled off again in the bright water before rinsing off and sun bathing on deck. Two more stops followed, including one to a large island where we all hiked up into the mountain and looked straight down into the water, which was so clear you could see deep into its depths.

The cruise returned to Fethiye around 5pm and we spent the afternoon packing and preparing to move up the coast towards Ephesus.