A Near Miss on Base Camp One 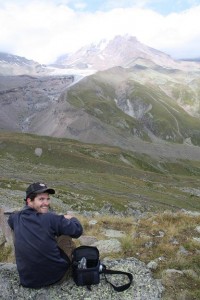 Mike at the Summit

In the morning we awoke to the sounds of people around us, and, paranoid that we should perhaps not be camping on church grounds, packed up our tent and decided to start hiking further up the mountain. There is a glacier about 900m up (but over 3k distance wise) the mountain, so we aimed for that. With the packs, the going was slow, but we made progress slowly as we watched the summit of this 2000m mountain loom closer.

Once at the top, there was an astonishing view of the glacier beyond, and of base camp one for mount Kazbeki assents. It was noon and we decided that without warmer clothing and clamp-ons for our boots we should not risk crossing a glacier to reach a frozen plateau where we could freeze to death in our tiny tent. We turned around and began the descent. However, midway down the mountain a grump of a cloud hovered over us and began to pour, we threw down our bags, and in less than a minute our tent was assembled with us dry inside. We waited out the storm on the edge of the mountain in this fashion, playing cribbage, making a small esbit fire for food and warming up in the sleeping bags. Two hikers (now soaked) climbed up and we emerged from our tent for a top-of-the-world get to know ya. They were photographers on a mission to photo raptor birds in the wild. We chatted a bit before breaking down the tent and continuing our descent.

We passed the church, and our campsite from the night before, and in the middle of the woods encountered a Frenchman on his way up named Julien. We chatted a bit before climbing down the rest of the mountain. 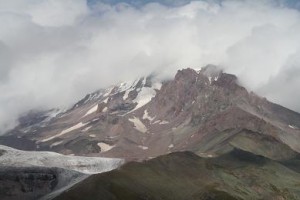 Back in town, we ate at the same café as the day before, and they advised us on camping in the park on the edge of town. We ordered food and a few beers and Julien showed up and joined us for dinner and told us about his amazing trip from France to basically all over. We had a few rounds of beers while Julien had a few rounds of French fries and then it got dark while we told travel stories. It was already late so we quickly headed into the park once the beers were empty and the mosquitoes emerged. In the park there was a stream bisecting the north and south parts. We crossed a log over the river by moonlight, and set up our tent on the northern bank.

In the morning, we packed up the tent and faced a river that, in daylight, looked impossible to cross with our bags. Somehow, in the moonlight, it had seemed safer. We managed to cross the rickety log without incident and then got lucky when we nabbed two seats on a bus back to Tbilisi. Although I was car-sick the entire time, it was a pleasant enough ride with a great group of people who were about as friendly as any group could be.

2 thoughts on “A Near Miss on Base Camp One”