A Week of R&R in Tashkent 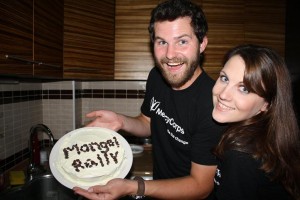 It is an amazing thing to meet up with one’s parents in the middle of nowhere. We met my folks in Tashkent for a week of R&R at little more than the half-way point of the Mongol Rally. In previous years of traveling we’ve met them in several other odd places around the world and always we’ve had great adventures and a lot of fun. This time, in Tashkent, we stayed at a lovely place with an indoor pool, dart board, ping-pong table and in-house cinema. My folks provided copious amounts of beer and booze , as well as amazing Western food, and we provided a horrifyingly bad aroma from our dirty clothing and dusty car.

We started off by washing everything, the car included and scrubbing our skin. We all thought we had tans but it turned out that after a few showers the darker skin went down the drain, must have been dirt so ingrained into our pores it became part of us. That first night we stayed up until 3am talking, playing games and catching up. My sister made an amazing Mexican-inspired meal, and the three of us disgusted everyone by digging into the food like starving animals.

We were wined and dined in real style with American food and snacks, something we hadn’t seen since we left the States more than two months ago. We even had Doritos and Bill and Mike split a box of Mac & Cheese. My folks even went through the trouble of locating Captain Morgan and Jack Daniels in the middle of Ramadan in Uzbekistan to have it ready for our arrival. My sister made a chocolate cake that mysteriously disappeared when she left it alone in the kitchen.

Later in the week, my dad hired a local man to make plov, a national dish of rice, carrots, lamb and spices, and kebabs of lamb and chicken in local spices. They arrived, set up a wood fire and cooked everything in the yard over the course of a few short hours. We sat outside on the traditional Uzbek tables (it looks like a wooden bed with a small coffee table in the middle, you sit crossed legged under it to eat) and watched the sun go down as we ate. Later, we had a dart tournament (Dad won, naturally) and tried out the in-house cinema. I jumped in the indoor pool daily. It had been so hot and so muggy the last several days that any chance to feel cool and clean was a welcomed treat. 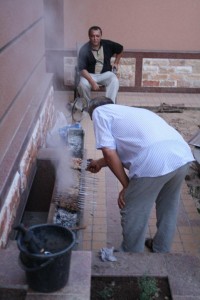 It was extremely difficult to leave after only a week seeing my family. We had an amazing time going to bazaars in Tashkent, out to dinner and drinks, and just spending time playing games and talking. Our final night arrived and my parents took us to the best steak joint this side of New York. City Grill, in Tashkent, is a place I’ve raved about before, but this time was even better. My filet mignon was perfectly cooked, and the side dishes we so good that it was a shame to actually eat them. We had a great time, and the taste of that steak kept us happy for several days afterward, just thinking about it.

They drove with us to the Kazakh border and watched as we crossed into no-man’s land between Uzbekistan and Kazakhstan. It was hard to say goodbye, as it always is, but we had an unbelievable week of stress-free relaxation and great food and drink that literally was an oasis in the middle of our Mongol Rally journey.