Realistically, money and time are the two biggest factors in our estimation as to why Americans don’t travel abroad. Airfare is costly and flying is a hassle. Meanwhile, Americans on average get around two weeks of vacation a year– not enough to get abroad, get over jet-lag and start enjoying another country. In reality, many of those vacation days are used here and there for extensions on Thanksgiving, for family birthdays or other small events, and that results in, usually, less than two weeks in one chunk for travel. Its not surprising that Asia or the Middle East seems out of reach to Americans who have around 7 days to travel, explore and return. That doesn’t sound like a vacation, it sounds like a gauntlet. 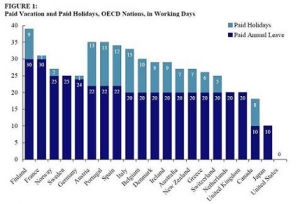 In contrast, the average worker in Europe gets around a month of vacation. By law, all countries in the European Union must allow all workers four weeks of paid vacation at a minimum. Even part-time workers who have worked more than 13 weeks are entitled to their month of paid vacation. This isn’t accrued, its a right. And that doesn’t count public holidays, which are paid days. Americans get 13 days, on average, though some companies have adopted even stricter vacation plans for entry-level employees, like the company Mike worked for in Minnesota. They told him his two weeks of vacation were “To ambitious for an entry level employee.” To which Mike said “audios!” (Chart above shows average PAID vacation days by country) 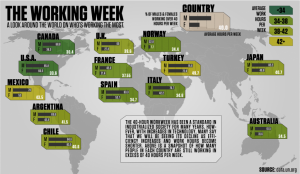 Meanwhile, workers in the USA have longer daily hours, on average, then their European counterparts. This is interesting because the average salary (even taking into account cost of living) is lower in the USA on average. For example, countries in Europe have a standard 40 hour work week and depending on the country there are laws in place to put a cap on how many hours of overtime per week and year an employee can log, according to the Federation of European Employees. And although the 8 hour day wasn’t always in place, it wasn’t until 1937 that the Fair Labor Standards Act was signed into law and the 8 hour work day (44 per week) in America became accepted as a baseline for a new standard. (Chart above shows average work week by country and gender).

Granted, there are social implications to these differences in Europe and the US. For example, Europeans are taxed at a much higher rate and companies have to sell products at higher prices to follow labor laws. However, the work-life balance in Europe does seem to be more balanced than in the USA, where success is more important that enjoyment to many. Still, the differences are drastic, and many health related problems in America are stress related, possibly stemming from overwork and lack of holiday time.

Along an entirely different chain of thought, perhaps one reason for the shortage of Americans traveling is fear. American movies constantly have foreigners as the ‘bad guys’ and a general lack of knowledge about other countries and their cultures in the US may lead many to think it isn’t safe anywhere abroad. When the media constantly cover problems abroad in uniquely terrifying language, its no wonder people think the entire world is dangerous. Meanwhile, Americans don’t speak a second language, and this limits their capacity to travel abroad with confidence. Luckily, English is the language of travel, but to many places (Africa and Asia) even English won’t suffice. The American education system should require students to learn a second language fluently by the time they graduate from High School. What language they learn should be their choice, naturally, but it holds people back from traveling, working abroad or even understanding a second worldview when they are limited to one language. Ideas are only as solid as the language in which they are expressed, so learning a whole new language is like learning a second culture, a second way of viewing the world. Americans (myself included) miss out on this when they don’t learn a second language as a child.

CNN Travel recently did a story on the surprisingly low number of Americans who travel abroad. We were excited to see they quoted several of our fellow international travel bloggers, folks like Nomadic Matt and Everything Everywhere.

US citizens can learn how to apply for a US passport.

7 thoughts on “Americans Not Traveling Abroad”