…and Now I’ve Been to Boston in the Fall

We decided to head to Boston to see do the freedom trail. This is a fairly short walk through all the major landmarks in Boston related to historical events. The route is conveniently marked by a double row of red bricks and along the way there are signs explaining the top sights. There are a few amazing things to see along the way that are not marked with red bricks, like the USA’s oldest continually operating pub. Yes, we had a few pints there. It’s historical research! 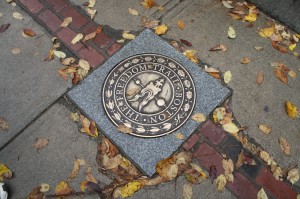 As a heads up, parking in Boston is a rip off. We paid over $30 for the privilege of spending slightly over two hours walking around Boston in the rain. That’s enough for a low budget hotel. What a scam! We’re told there is cheaper parking, but downtown we sure couldn’t find it. On the upside, we spent $30 to see all of downtown Boston and be close to the car for our pre rush-hour escape.

We started the walk by checking out the oldest school on the coast. Pretty fancy for a bunch of pilgrims turned city-folk. Then we saw the site of the Boston Massacre and the town hall. A wee bit depressing but it really brought the whole story into reality for us. You can picture angry residents in the square demanding more rights, and then the inevitable shooting that occurs whenever young soldiers are stressed and confronted with a situation they weren’t trained for. 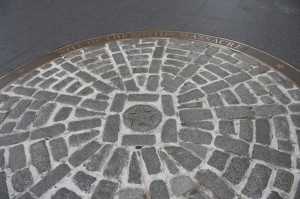 The oldest pub, the Bell in Hand, was amazing. A bit on the tacky side once you get inside for a pint, but the prices are reasonable, the ale is good and the story behind the pub is worth the visit. Nearby the Green Dragon was the home to inciters who helped launch the American revolution. 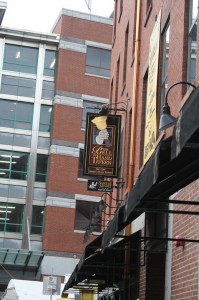 Ben Franklin was born in Boston, and his statue graces a few corners and nooks throughout the city. It’s also home to the late, great Paul Revere. We visited his home, a cute little place right down town. 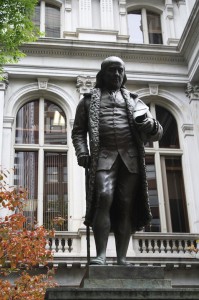 Boston is a beautiful city clothed in red brick, surrounded by clean, green-tinted water and full of friendly people. We leave you with a picture of Town Hall, behind which the Boston Massacre occurred. 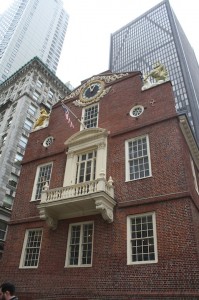