And The Journey Continues 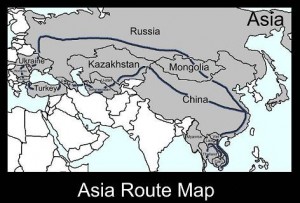 With a little help from our friends, OK a lot of help via their visa agent, we are finally all ready for onward travel to Baku, Azerbaijan.  About a week ago we decided it was time to get our travel documents in line so we went down the the Azerbaijan Embassy.  As we approached, we noticed a few dozen people standing around outside the embassy.  The doors were wide open and no one there was in uniform, so we proceeded to walk right into the embassy.

A man in khaki pants and a plain button down short-sleeved shirt put his hand on my chest after we were inside the courtyard.  Unfortunately, our Russian has not improved at all since we’ve been here and we did not understand a single thing he said except for the word “passport” – which sounds the same.  So I handed him my passport, he waved us out, and bolted the metal door leaving us, and all the other people stranded outside.  The first thing that came to my mind after that was, “Does he even work here?”

We shared a short laugh about our situation and as the smiles slowly faded from our faces over the course of the next several minutes,  we realized that this, like many things in Central Asia, was going to be a headache.  It is always what you least expect, and these little underestimations can do massive damage to your travel plans.  After standing outside the embassy doors for about 15 minutes, the man in the button down shirt poked his head out the door and handed my passport back to me, but did not say a word.  The door slammed again and the latch locked.  We waited another 15 or 20 minutes, rang the buzzer to no reply, and decided to leave.  Everyone else there looked like they had scheduled they entire day to be there.  One woman and her friend even had a small basket with her and they rolled out a blanket on the bench and had a picnic.

Our friends, who have helped us out significantly in Central Asia, passed our documents on to their visa agent to help expidite the process.  A couple days later we got terrible news that our visas had been rejected!  As our days here are numbered, this made us really nervous and we started to panic about the rest of our trip.  Luckily, we reapplied with an invitation letter – which you need even for a transit visa of 3 days apparently – and we just found out that it was accepted.  So on the weekend of the 22nd, we are heading off for Turkmenbashi to take the Caspian Sea ferry to Baku, Azerbaijan.  We plan to leave on either the 23 or 24 of August, but by the time the ferry arrives in Baku, we are going to have to rush to get to Georgia in our 72 hour period – which commences somewhere in the middle of the Caspian.  We have heard some horror stories about the Caspian Sea ferry, but are in good spirits and plan to make the most of our trip, which now consists of a few extra destinations.

Thank you to some very generous donations, we will extend our trip to Greece!  Our current itinerary, which may change again, now is: Turkmenistan, Azerbaijan, The Republic of Georgia, Turkey, Bulgaria, Macedonia, and Greece.  From Greece we may continue on through some of the Balkan States and then on through the Ukraine to Russia, Mongolia, China again, and Southeast Asia.  We are excited to get on the road again and will keep you all updated.  Thank you all again for your generous donations!

One thought on “And The Journey Continues”