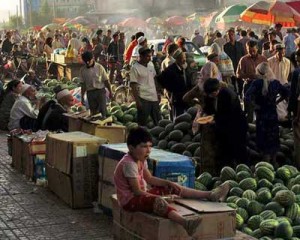 We arrived in Urumqi, Xinjiang,at exactly 4:10pm today (right on time) after a 48 hour train ride across China. From here we have purchased tickets to Kashgar for tomorrow at noon, and will arrive in the city around noon the next day (24 hour train through the Taklamakan Desert). From there we have no plan, but need to be in Kazakhstan between the 17th – 20th. We hope to spend quite a bit of the next 15 days in and around Kashgar where Mike hopes to get the famous dry-shave that Tim to heartily recommended.

The train ride was an amazing experience, and one of the best train rides we’ve ever taken. A Uyghur man and his wife were in the bunk below us and the man proceeded to play his violin into the evening as a small community of Uyghurs gathered in our car to sing along, suggest songs, and listen. The man, upon hearing we were American, played some Western songs for us, including Wagner and Gershwin.  We were fortunate to be in such a great car for such a long trip. On previous journeys we have had crying babies or spitting businessmen on their cell phones well into the night. A small boy was on the train with us and he did not cry the entire trip (as I would have done at age 2). Instead, he ran around the car making friends with everyone and sitting on every lap in the car. At one point he defecatedin the only sink in our car, but his mother lovingly fixed the problem with her only towel….which she then washed in the sink and used to bathe the child. At any rate, he was a happy boy and he cheered up the long trip.

Urumqi is as we remember it – a cosmopolitan city bustling with movement. It seems everyone here has luggage and is on the move. We have only this evening to spend in the city, so will head back to the Uyghur night market. Having spent ten days in this city in 2006 I am not upset that we cannot spend longer now, but it is a lovely place.

Of minor inconvenience, my original backpack broke on day one of the trip. I replaced the bag in Shanghai with another that broke this afternoon. The damage is not total, and because I am my father’s daughter I had enough rope and caribineers to fix the problem.

We have my guitar along on the trip, and I hope to improve quite a bit as we travel. Tonight we’re re-stringing the guitar with nylon strings so I can really learn the Spanish guitar songs I love so much. Watch out Gypsy Kings!

2 thoughts on “Arrived Safely In Urumqi”