Moving to Shanghai: ATC Relocates to the Middle Kingdom

On February 15th, 2008 we boarded a plane, after several delays and visa problems, to Toronto, Canada. We had a ten hour layover over the night and would be catching the first morning flight to China.

When we arrived in Toronto we discovered it was frigid outside, and impossible for us to venture forth without having to go through the agony of airway security. So, we found a nice padded bench and fell asleep.

We were awoken in the night as a Canadian man approached and sat in the opposing bench, he was a government worker who would also be on an early flight. He talked with Mike about architecture and Canadian politics while I snoozed, and by morning the two had become friends. Though a good fifteen years older than Mike, the two would retain their email-based friendship throughout our stay in China, sending pictures and typing observations.

Finally at 9am we boarded our flight on Air Canada. Allow me to interject to mention that Air Canada is one of the few remaining airlines that is truly bearable. Each seat has a video screen in the back of it stocked full of recent releases. Having a mild fear of flights, I sat awake on most planes holding the arm rests and blinking out the window at the sun. This flight was more relaxing, and the constant stream of movies I could chose and control kept me entertained the full fourteen hours while Mike slept. Also worth mentioning—Air Canada has free drinks on international flights, making it the only airline worth flying on. 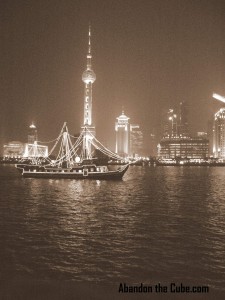 After a glorious flight we arrived in Shanghai around three in the afternoon and set about gathering our bags. I had acquired an Air Canada blanket from the flight which I wrapped myself in and snoozed by the baggage carousel. Mike awoke me with a cart full of bags and we sauntered out into the bright sun and hailed our first Shanghai cab.

Our bags would not fit in the cab, so they upgraded us to a small bus. The bus took us the forty-five minute drive to the Bund, where we had previously picked out a hostel to crash in until we found jobs and an apartment. We were excited at finally being back in China, but exhausted from jet-lag. We checked in, after much negotiation, to a hostel that was under construction and not legally open for business. The owner was a very friendly woman from Hunan province, who heaped us with cups of tea and shows us our freezing room, instructing us only to use the heater is it was an emergency. She had a baby strapped to her back as she worked.

We found a nearby restaurant and dinned on sweet and sour pork, qingcai and Tsingtao beers. We then thought it best to take in the immediate area, and headed off with our cameras to see what Shanghai was all about. We first walked to the Bund, a massive boardwalk, of sorts, along the Huangpu River, which bisects Shanghai in half vertically with the financial centre on the east bank, and the traditional old town on the west bank. We were on the west bank, looking across the river at the Pearl of the Orient and the tallest building in China – Jin Mao Tower.

We snapped several pictures of the area before turning back and passing the hostel to see what lie to the south. We happened upon a beautiful park with bamboo forests and a large moat around a grass field. We sat down and realized how tired we really were. Rather than slumber among the bamboo, we headed back to the hostel where we declared it an emergency and fell asleep to the sounds of the heater’s humming. When we awoke we discovered it had been turned off during the night.

Moving to Shanghai
Previous PostApartment Hunting in China: Finding Home in Shanghai Next PostTop 5 things You Would Miss the Most About America