Ashgabat to Turkmenbashi and Leaving Turkmenistan by Ferry 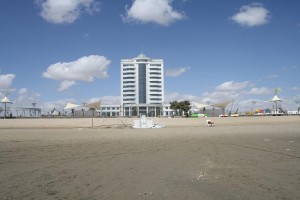 Having heard and read countless horror stories of the ferry situation from Turkmenbashi to Baku, we were eager to try for ourselves. Many a tried and tested traveler has waited for these infamous ferries only to give up and fly across the Caspian after several days of waiting. We were determined not to spoil the integrity of our “by land only” trip from Shanghai to the Western world by jumping on a plane now, having come so far. With a difficult path across the ocean ahead, we set off from Ashgabat, the capital of Turkmenistan, by car to Turkmenbashi, the city on the Turkmenistan coast. The ride is a bone-jarring seven hours, which Lauren spent entirely, unconsciously asleep while Mike looked out the window at the camels and barren landscape. We rode in style in a Land Cruiser with decked out suspension and four-wheel drive. Even more importantly, we had a cooler with day-old pizzas and a recently acquired (thanks Emily) bottle of Captain Morgan and coke. The industrious driver quickly poured out a bottle of water and used his bowie knife to cut it into a cup for Lauren’s cherished Captain Coke. The driver would yell out “SIP BREAK!” between bumps and Lauren would gulp a bit down, making this the most luxurious ride so far. The trip, thanks to the Captain and the napping, went by quickly and we pulled into Turkmenbashi without incident.

Turkmenbashi is a fascinating city with brightly painted buildings that make the white marble palaces of Ashgabat seem bland. We situated ourselves in a hotel in Awaza (the ritzy new area of Turkmenbashi that the president hopes will soon 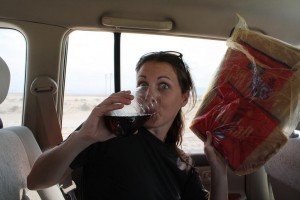 Probably our Last Rum and Pizza for a while

be “the Dubai of the Caspian.” There is much work to be done before this collection of hotels along the coast picks of the resort vibe that city planners hope to achieve. One is required to drive past a large lake of oil sludge and sewage that has collected over several years and reeks in a way that is indescribably bad, though I’ll try: boiled eggs, vomit and peanut butter mixed with fish rot and the smell of sweaty sandals after a long walk.

Having situated ourselves comfortably in the hotel, we ran down to the beach and jumped in the Caspian without fanfare. The water was cold and the waves were strong, but the sea snakes that had been present on our last visit to Turkmenbashi were now gone. After several hours Mike and the driver set off to find beers, and returned with a nice collection of beer and chips, which we ate after dinner, while watching TV and gazing out across the Caspian.

The following morning was D-day for our first attempt at catching the ferry. We awoke and ate breakfast at the hotel. We picked up our translator and together drove to the ferry terminal. Originally, we wanted to do this entirely without assistance, but as the stories mounted of travelers being rejected or stranded, we opted for help. Our translator inquired around the ferry terminal about when the ships that were docked would leave for Baku. Nobody could provide an answer and the window where you buy a ticket was decidedly vacant. A border guard told us that nothing would launch until the storm passed. There were, currently, very high winds but no rain or clouds in the sky. There were about six women and their various children sitting in the waiting room, all of whom looked dejected, miserable and downtrodden. One woman, who turned out to be from Ashgabat, spoke to us in English saying a ferry might be possible that afternoon.  We got no other information and decided not to sit around and wait since we had the luxury of a driver and translator.  We went back to the hotel, swam in the Caspian until we were exhausted, ate a hearty lunch and then all returned to the ferry terminal.  More had gathered in the waiting room, but there was still no information.