It’s official! We’ve finally ironed out our route details to the finest detail. We have decided to head from London to Paris, and from Paris to Luxembourg. After a break, we’ll head to Nuremberg and the Prague for the 2010 Czech Out Party, which we’re all very excited about. From there we head south to Bratislava and Budapest before entering Romania for a few castle tours and vampire stalking. We then head to Chisinau and then into Ukraine to the famous port city of Odessa. From this point on the trip gets really interesting. We head due east through Russia, hugging the Black Sea coast until we enter Kazakhstan. We’ll cut inland and aim directly for the Aral Sea inside the Uzbek border. We’ll cut across Uzbekistan and then re-enter Kazakhstan heading north into the mountains. Back into Russia for a moment before entering Mongolia and racing across the open Steppe to Ulaanbataar. Yup, that’s what we’ll be doing this summer, driving across 1/3rd of the distance around the trodden earth. If none of this made sense, check out the nifty map we made (yeah, I should have led with that!):

This map is awesome, and really shows the distance and scale of the land we’ll be covering. Some 8-10,000km through 13 countries in a car that even Mickey Mouse would say is too small– a 1.5l engine auto. Below is a picture of a rally car from 2009, ours will be very similar. 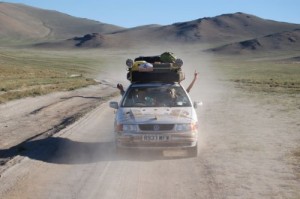 If you are more interested in the car, aka- how to buy, register and insure one in Europe, or even cooler (if that is possible) a post on all our awesome media coverage, or possibly the list of woe-is-me updates we made when we were feeling down, then check out these other posts or head to the Mongol Rally and Sponsorship pages, which explain it all.