Baku The Ancient City with a New Face-lift

We arrived in Baku at 1:00am and disembarked from the ferry with a sigh, it had been an amazing trip, and although it was over 30 hours from boarding to alighting, we were sad that the ‘cruise’ was over. By the time we got through the ridiculously lengthily customs and border check at the sea port it was around 3:00am. Being thrifty, “a penny saved is a penny earned,” we decided that spending $20 each on a hostel that night was a waste of money since we’d only get to sleep a few hours. After a short debate we decided it would be humorous to stay awake all night and watch the sunrise. We heard a rumor that there was a McDonald’s in town, and we were determined to be there for the Mc-Awesome-Breakfast. We strolled along Baku’s main boulevard along the Caspian shore-front, a magnificently redesigned and renovated walkway that parallels main European fairways. 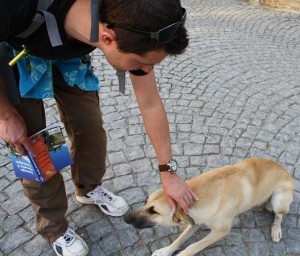 At one point along the walkway Mike rested himself upon a bench and I walked down to see if there was anywhere in the cover of trees to pitch our tent for a few hours of rest. As I was walking alone looking for a spot, a man approached me and was so persistently asking for something and winking so devilishly that when he came close and attempted to reach out at me I was forced to yell for him to desist and put my hand on the knife I always carry. He continued to pester me and I had to pull the knife out and glare grumpily. All the while I was walking (trying to appear calm) towards Mike, and when I was within earshot I called out to Mike and the creepy stranger sauntered off into the trees and disappeared. Having pulled my knife on someone within an hour of landing in a country we decided that all night walk-abouts were perhaps best carried out on lighted streets.

We cut into downtown Baku and were amazed at the beauty and architecture of the city. The entire place is being renovated and upgraded as Azerbaijan is in the midst of a very profitable oil boom. New facades of shaped sandstone with wooden balconies are going up all over the main parkways in the city, giving the entire city a facelift. We walked around in bafflement at how European the city appeared. Having found that the McDonald’s was not a 24 hour establishment in Azerbaijan, we walked to a nearby Turkish donar booth and purchased a few beers. This was the earliest breakfast beer of my life at 4:30 in the morning, but we toasted our much-anticipated arrival in Baku as the sun rose above the sandstone buildings around fountain park.