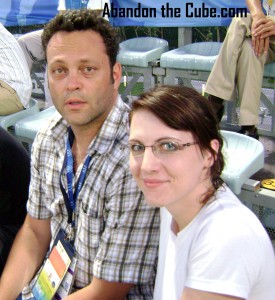 We finally arrived at the baseball stadium, though an hour and a half early. There were over forty volunteers checking tickets and working security machines. I took out my camera, aimed it at the volunteers and was instantly tackled by a young man saying in broken English, ‘no pictures!’ I laughed and said back in English, ‘no pictures at the Olympics. Are you serious?” He was not laughing.  I put my camera back in my purse, shrugged and walked towards a metal detector.  Another volunteer yelled towards the back of the procession in Chinese, “hey, can we let the foreigners in yet?” Mike and I looked at each other in awe. Chinese visitors were already streaming into the area, why wouldn’t we be allowed in. Someone in the back yelled an affirmative and we went through security. Mike’s cargo shorts beeped each time the volunteer swept the wand over his legs. It would beep and Mike would say, “keys” and the volunteer would not and sweep another beeping area, “belt,” “camera,” “sunglasses,” “change.” This went on for quite a while, the volunteer never asking to actually see inside the cargo pockets to see if Mike was telling the truth. He was. But naturally it was funny because it just as well had been “knife” “gun” “mace” and the guard would have nodded and moved on. Meanwhile, an aspirin container in my purse was being emptied onto a metal table. I explained that they were vitamins. He asked why some were red and some were white. I explained, without batting an eye, that they were A and B vitamins, and possibly C in there somewhere as well—have to keep the body healthy! Aspirin is prescription only in China and one cannot carry pills without prescription.

The baseball stadium was a small assemblage of temporary scrap steel twisted into the façade of an arena. We walked along the outside for a long while until we finally found out sector. Outside the heavily guarded entrance was a concession stand. Beer was less than a dollar! We loaded up on beer and sugar popcorn and headed for out seats. The whole area was empty so we sat together. After a few minutes two Americans showed up and sat next to us, one was from Boston and looked like Tony Sapprano. The other was from New York and looked like he might have been a club bouncer. Mike offered to  buy them a beer and boom, we were on the good graces of the American mob, which was comforting. We wished we were sitting somewhere else.

Tony Soprano yelled at the Cuban team as it took the field. Naturally, we yelled along with him after he nudged me with his elbow and gave me an urging look. We drank our beer, cheered for the good ol’ boys and generally had a great time. 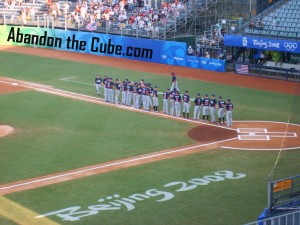 After a few disappointing innings we found ourselves in the unfortunate situation of being out of beer. Mike made the trek to the nearby concession. While he was away a familiar looking gentlemen sauntered by us and sat towards the back of the stadium. I recognized him from somewhere but I couldn’t put my finger on it. Then Tony Soprano stood up on the bench and screamed, “we fucking love you Vince Vaughn!” I was astonished! Not only did Vince turn, but seeing the giant and the mobster, he smiled and cheered on the American team in unison with the mobsters. I sat petrified, meanwhile, at being in the middle of such an awkward and embarrassing scenario, and I wished Mike would hurry back with the beers. Liquid courage. After another round Mike and I went up a few steps and talked to Mr. Vaughn. I had my picture taken and Mike shook his hand and he instructed us to enjoy the rest of the game. I felt bad for the man, who was sitting alone and would have liked to ask him to come sit with us if it didn’t mean including the mafia. We were all smiles as we sat back down. Neither one of us had ever met a celebrity—he was amazingly normal. Totally drunk, though, as one should be at a baseball game.

One thought on “Baseball, Vince Vaughn and Cheap Beer”