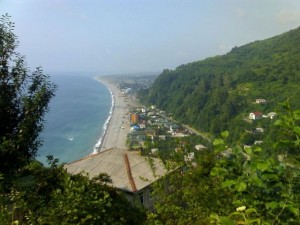 After Bojormi National Park, Gori, Tbilisi, Kazbegi, Baku, and the Caspian Sea ferry, we were ready for a break. However, we were unaware that we would get such a great one. As our minibus emerged from the foliage and hilltops, we caught our first glimpses of the Black Sea. It was right here that Jason and the Argonauts landed in search of the Golden Fleece. Being a huge fan of the film from childhood, it was an awesome experience coming to the realization that the story was based on actual legend and places and that we were standing on the very ground that the story unfolded upon. My first impression of the Black Sea was that I quickly understood where the name came from. Black clouds were rolling over the hills surrounding the sea and gave the water a opaque dark color. The beach was very rocky and, my imagination running wild, I thought of the rough whitecaps throwing wooden ships onto the rocky shores.

After a few more hours, the bus pulled to a stop near a small port city. The bus driver turned around, enamored that we were from ‘America,’ gave me a head nod and said, “Batumi.” He then gave me a thumbs up and said, “Chicago Bulls.” I immediately got a west coast United States feeling from Batumi. It seemed like a laid-back beach community. We wandered through town with our cumbersome bags, receiving stairs of wonderment and distress. Many women would stop and stare at Lauren and look at her in distress over the big bag she was carrying on her back. I couldn’t help but feel like they then glared at me as if I was some kind of horrible creature to make her walk around carrying such a weight. We found an acceptable place to stay, albeit slightly musty, but we just figured that added to the coastline experience.

We walked down to the beach and, although still very rocky, we found it full of locals. We enjoyed two days and three nights in Batumi and kicked our feet up in the laid-back atmosphere. Lauren read her books, drank a few beers, and snacked in the sun and under umbrellas, while I spent half my time floating out by the buoy and the other half, running into town or the other side of the beach to replenish water and other beverages. I found out, days later, that my parents were worried about us being in flooding that was going on in Turkey. Little did they know that we were laying out on a beach drinking vodka tonics. It was a very enjoyable drive out to Batumi and the atmosphere was unlike anywhere else we had been, and was very different to anything else in Georgia. Batumi makes for an interesting entrance or departure into the Republic of Georgia, but definitely a must see in Georgia, as we saw Georgians in a new relaxed light we had never seen them in before.

One thought on “Batumi Beach Paradise”