After a while it was obvious we were not going to win the game, and in fact it was 10- 2 Cuba when we walked out of the stadium with our heads down. We caught a cab and met some friends in SanLiTun, the infamous bar street in Eastern Beijing. The street is notorious for heavy parties, drugs, illicit film stores and hundreds of foreigners and very few local Chinese. It was, basically, what Chinese locals thought of America—dirty, drugged and laughing about it. We met up with our already trashed friends in a bar called the Q Bar. A young Chinese lady in the tiniest shorts and smallest shirt came up to Mike and took off his baseball cap and put it on her head. 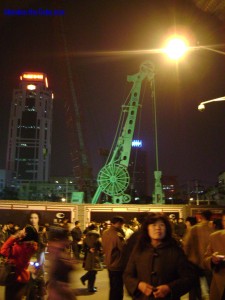 Naturally I was furious, more because it was actually my hat, not his, and I didn’t want it getting an STD. She giggled and fell down on a padded sofa lounge, pulling another of our friends down on top of her. This went on for quite a while, until after some time it seemed normal and we forgot all about her presence.

At the Q Bar a friend of ours from Shanghai showed up with tickets to the athletics finals which he had scalped earlier that day from a Finnish soccer player. He sold us the tickets for only RMB200 more than face value—an unheard of deal. We happily paid our friend, who was unaccustomed to the lady rolling on the sofa and therefore uncomfortable, and he left. He was Australian.

The finals were the next evening at 7. We had four tickets and it did not take long to convince our friends Ana and Dale to go with us. They were more than happy to oblige. After a bit we left the Q bar and sat around outside on a park bench marveling at the clear sky.

Pollution in China is a massive problem, and one without an obvious answer. Development and industrialization is their right and aim, yet to achieve this is it really necessary to go through such a period. Already China’s progress has mimicked Americas in that we had out industrial revolution and then, when wages were high in the US and manufacturing was not really economically feasible—we outsourced our factories and became a service society. China was already following this trend in outsourcing to India. Soon, would it be a reality that all the factories in China would move outside the nation and it would too become a service industry. Meanwhile, pollution in China was rampant as most factories remained in the mainland. The next phase in a free market economy is not yet fully underway and the pollution from factories, and 1000 new cars a day added to the streets of Beijing, has left the city permanently under a heavy grey cloud. We lay on the park bench in SanLiTun and marveled at the clear sky because it was not more than two years ago we lived in Beijing and had chronic coughs, blew our nose into white towels to reveal black goo, and generally could not run more than 100 yards without collapsing. Now, looking up at the full moon we were astonished at what had transpired. Would Beijing go back to its shitty air and poor traffic and collapsing citizens after the Olympics? Probably. We got in a cab and headed back to Dale’s mansion.