Boating up the Three Gorges 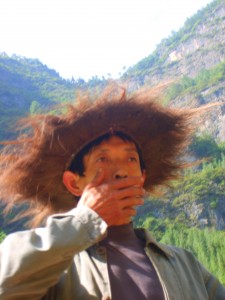 At 5:00am I was wide awake listening to an overweight and undereducated Chinese man yell at his wife in the hallway. They screamed as loudly as possible, yet no one asked them to be quiet. I wondered if this happened in America, if someone would ask them to take their fight somewhere more isolated, and decided that they would. Moments after their doors slammed shut, the sirens went off for our wake up call and everyone was moving and yelling in the halls at once. We ate cold rice porridge, boiled eggs with fecal matter caked to the shells and pickled beans with the Swiss couple before getting off the boat and into an overcrowded bus. The bus drove ten minutes up a hill, unloaded its cargo and the driver fell asleep against the wheel. We blinked back sleep and surveyed the area. We were outside the White Emperor City, a small island the Emperor had given to his younger brother to appease him. In a massive group, we walked along listening to the tour guide point out special attractions. Falling to the back, we strayed off course and looked around at the very modern, very new ‘ancient’ city. In a far corner we found a sign saying the city was built in 2005 after archeologists found a brick foundation they thought matched the description in a fictional work of literature about the king’s brother, the White King Emperor (so named because he saw white, dragon-like smoke pouring from a hole in the ground on an island, which he called the dragon’s cave). This may or may not have been that island, and that may or may not have been a factual story about a factual emperor. Dismayed at having been lugged out here for fake ‘history’ we spent the morning checking out the view of the gorges the island’s vantage points provided. We largely ignored the ‘ancient’ buildings and avoided the crowds all together. At the top of the hill stood a lone shack under construction, we went inside and saw a few Chinese gentlemen and their girlfriends from our boat. They were looking into glass display cases and laughing. One youth had his girlfriend take a picture of him making daemon faces in front of the case. We walked over to see that the case contained human remains. A sign nearby said that in ancient times a strange people had buried their dead in hanging coffins, high in the nearby gorges. These few coffins had been removed from their lofty resting places so tourists could pose in front of them. A hold in the glass case was drilled so tourists could fill the coffins with money for luck. We were aghast that the poor dead were being treated in such a way. The worst possible death I could imagine would comprise of being a part of a disrespectful, Chinese tourist trap in a fake city. I spent the day contemplating the way Chinese think of death and dying, a near theme for the trip so far considering the previous day’s outing and now the desecrated remains of an unfortunate man.

Back on the boat we sat on the deck counting the floating shoes we passed in the water. For some reason there was an excess of shoes (possibly because the rubber soles made them float). We wondered if for every floating shoe there was a pair of sunken pants and missing, sunken shirt as well. Mike wondered if we’d pass a body. Before the words were out of his mouth we saw something floating in the water 100 yard away from the boat. As we neared we saw four pale legs sticking out of the mucky river and saw that it was a bloated and green dead pig. Naturally, we stopped counting shoes, worried we would spot something equally or more disturbing than the dead pig. We mentally made a note not to eat anymore river fish.

At eleven we ate a hearty lunch on board with the Swiss couple and talked a great deal about politics, religion and the differences between Switzerland and the US (which are vast). Both of them had been in the US before, and had opinions on things that were very intense and new, and we enjoyed our chat immensely. By noon we had to get off the boat for a long day of touring. This was the highlight of the trip, and was especially touted as one of the last cruises humans would see of these cliff sides before the dam flooded the area. We boarded a smaller boat that held roughly 100 people, and the engine splashed up water as it took off down a mini gorge. We passed through several beautiful gorges before coming to the site of the hanging coffins. Up nearly 100 yards a small wooden coffin sat nestled in a square, man made cave along a steep and sheer cliff side. We wondered how the ancient peoples had put them up there in the first place, let alone how the Chinese tourism industry had gotten several coffins down for the White Emperor City. Further down we saw a monkey playing with a twig over the water, his long furry arms surprised us as we had never seen a monkey in the wild before. He vanished before we knew we had really seen him. After several hours of intense viewing, we halted and boarded even smaller boats of 20 which we took into an even smaller gorge. This tiny gorge was full of thin waterfalls spewing white spit. The water was clearer and our boat guide sang old fishing songs as he paddled us through the gorge. After a time we returned to the larger boat and again took off through larger gorges.

The boat stopped at a complete joke of a town that had at one point been an ‘ancient relic of China town,’ meaning, an old village. Because the water level would rise for the dam they had destroyed the old village and built a new one ‘exactly like the old one’ further up the hill for tourists to see how thoughtful the government could be. We looked around at the cinder blocks and 2x4s and left in disgust. Back in the original ancient village a poor old man was probably sifting through bricks for his possessions. Back on board we sped under several bridges under construction, as older, lower bridges would soon be wiped out, and finally arrived back in town where our ship was docked. 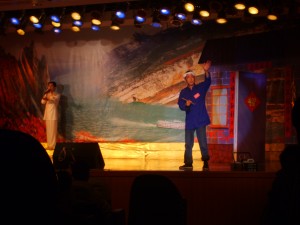 Instead of boarding the boat we were directed to a bus. Apparently a local troupe had a show prepared for us. We ate a quick meal with the Swiss couple before grabbing a row of seats in a tiny stadium. Twenty scantly clad Chinese dancers frolicked on stage while the men, dressed in loin clothes, bounced around in the background holding twigs. Meanwhile, a smoke machine filled the room and flashing neon lights bounced off the walls in what can only be described as the corniest thing I’ve ever seen. In a rare show of defiance, however, one song and dance routine among the pack of otherwise pointless and flashy dances, showed an old man, wife and child with her baby being forced from their tiny home by government officials. The officials pranced around the stage singing as the poor villagers gathered their belongings and cried. It was a silent, smokeless theater when the last note was sung and we all looked at each other in shock. This was the only scent of protest we had ever seen from the Chinese about the dam, and it was not in the least bit subtle. We swelled with pride for the troupe and clapped loudly at their courage for doing a show with so much criticism in it. In the final act the policeman lifted the elderly woman onto his back and forced her off stage while the man was dragged by another young man in uniform. It was chilling. We were very happy to see that there was, at least, someone else who felt the whole project was hurting more than it was helping.

Boarding the boat we fell asleep the instant our heads hit the dirty pillows. We stayed on the dock all night, listening to the water lap at the shore.

One thought on “Boating up the Three Gorges”