Book Review: Lost on Planet China: One man’s attempt to understand the world’s most mystifying nation, by Maarten Troost 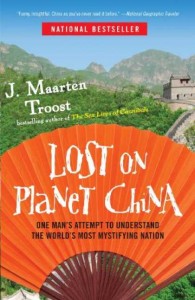 If you have ever been to China, then Lost on Planet China

will be full of inside jokes only you and other China travelers will understand. His insight into the psyche of the Chinese was amusing and comical, but hardly deep. It would be fair to say that more than half of the book was taken with Troost’s comical musings on the Chinese way of life, with the remaining bit concerned with telling where and what he was up to while romping around the Middle Kingdom.

Troost, who is perhaps most well known for his forays on lost islands, isolated from humanity. Now he has traveled from serenity to the world’s most populated country, and at times his frustration with the density of human life is apparent. While many may feel this is a drawback to the book, anyone who has been to China can laugh along with him as he remains frustrated at people pushing him in line, cutting him on the subway and spitting all over ever piece of bare land.

He considers briefly bringing his family to China with him, but decides against it due to the excessive amount of pollution he encounters during his travels, and that’s not to say he didn’t try to find a breath of fresh air while in Asia. Having lived in China for several years, Troost was apt in his assessment of the state of air in China, but he is also a bit jaded since he spent such a large amount of time on a tiny island in the middle of the ocean—aka the epitome of a fresh air location.

Troost has a very unique writing style. At first it was hard to get into, but after a chapter or two his cheeky textual habits become cute in a quirky way. Having read another book of his, The Sex Lives of Cannibals, which describes his time in Kiribati, I feel that not only has his writing improved, but his sense of humor has expanded a great deal, making his new book a pleasure to read.

3 thoughts on “Book Review: Lost on Planet China: One man’s attempt to understand the world’s most mystifying nation, by Maarten Troost”